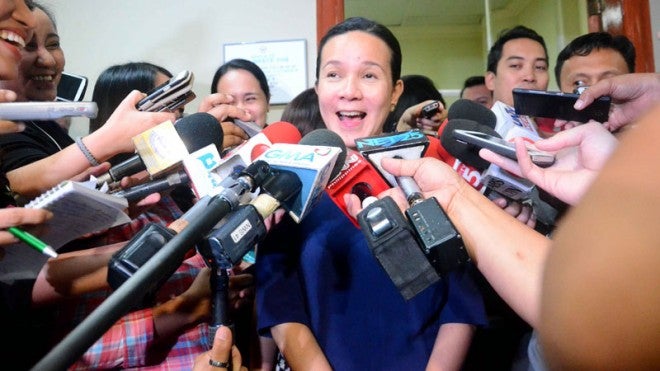 “She left a really good impression.”

Exactly a week after meeting with NPC stalwarts, Poe and Escudero sat down with NPC lawmakers and governors from the Visayas and Mindanao at the party’s headquarters in New Manila, Quezon City.

Noting that the meeting was consultative in nature, Duavit said more NPC members want to get to know the lady senator better.

“Maganda kasi naprocess na namin yung inputs nila from the last meeting. Overall we’re really positive, the impression she (Grace) left,” Duavit said of the meeting. “Well it’s consultative in nature but it has a very big impact. It’s more of a getting-to-know-you.”

Poe said individual party members expressed encouragement and support whatever her political plans in 2016 would be, adding that it was heartwarming to be with people who supported the presidential run of her late father, Fernando Poe Jr., in 2004.

Asked if the two meetings with NPC gave her more clarity and confidence on what role to pursue in next year’s polls, Poe said what was important was that she became more aware of the pressing needs of Filipinos in the localities.

But the lady senator maintained that the meeting was not mainly political.

Duavit said NPC will have a third meeting with Poe and Escudero in the coming weeks, which will be attended by mayors and other local officials.

Poe and Escudero, who are believed to run as tandem in the 2016 national elections, met with NPC members on August 11 at the same venue on Balete Drive.

While noting that no formal talks regarding next year’s polls transpired last Tuesday, Poe previously said individual NPC members had expressed their encouragement and support for her to run for president in 2016.

Poe, who topped recent preference surveys for both potential presidential and vice presidential bets, is being wooed by the ruling Liberal Party to be the running mate of Interior Secretary Mar Roxas.

NPC stalwarts also met with Roxas over a closed-door breakfast on Aug. 11.

NPC president and Isabela Rep. Giorgidi Aggabao previously said many members of the party are leaning toward supporting Poe if she would run for President.

Poe and Escudero, however, are yet to announce if they will seek higher office next year.

With two senators, at least 40 House of Representatives members, 14 governors, 22 city mayors, and hundreds of municipal mayors, NPC is the second-largest political party in the Philippines, after LP.

NPC would decide as a party who to support in 2016. Yuji Vincent Gonzales/TVJ