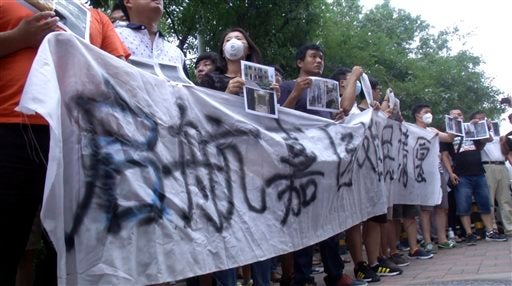 In this image taken from a video footage from AP Video, residents hold up a banner which reads: “Refugees from Qihang Apartment Complex appeal” outside a hotel where officials held daily media conferences in northeastern China’s Tianjin municipality Sunday, Aug. 16, 2015. AP VIDEO VIA AP

TIANJIN, China—Authorities pulled more bodies from a massive blast site at China’s Tianjin port, pushing the death toll to 112 on Sunday as teams rushed to clear dangerous chemicals and prosecutors prepared an investigation into those responsible for the disaster.

More than 700 people were injured and 95 people, including dozens of firefighters, are missing after a fire and rapid succession of blasts late Wednesday hit a warehouse for hazardous chemicals in a mostly industrial area of Tianjin, 120 kilometers (75 miles) east of Beijing.

By Sunday, authorities confirmed there were “several hundred” tons of the toxic chemical sodium cyanide on the site at the time of the blasts, although they said there have not been any substantial leaks.

Sodium cyanide is a toxic chemical that can form a flammable gas upon contact with water, and several hundred tons would be a clear violation of rules cited by state media that the warehouse could store no more than 10 tons at a time.

Tianjin officials have ordered a citywide check on any potential safety risks and violation of fire rules, mandating suspension of operations for factories that cannot immediately comply with safety rules. Chinese Premier Li Keqiang was in Tianjin on Sunday, visiting those injured and displaced by the disaster.

The country’s top prosecuting office announced Sunday that it was setting up a team to investigate possible offenses related to the massive blasts, including dereliction of duty.

Zhi Feng, general manager of the warehouse’s operator, Ruihai International Logistics, has been under police watch while he receives medical treatment to ensure he does not flee during an investigation, state media reported, without giving further details. Zhi was hospitalized after being injured in the disaster.

The death toll includes at least 21 firefighters—making the disaster the deadliest for Chinese firefighters in more than six decades—and their toll could go much higher. About 1,000 firefighters responded to the disaster, and 85 of them remained unaccounted for on Sunday.

Angry relatives of the missing firefighters and local residents whose homes were destroyed by the blasts showed up at a government news conference Sunday to demand information and accountability.

The public has raised concerns whether firefighters were put into harm’s way in the initial response to the fire and whether the hazardous material—including compounds combustible on contact with water—was properly taken into account in the way the firefighters responded.

The massive explosions late Wednesday night happened about 40 minutes after reports of a fire at the warehouse and after an initial wave of firefighters arrived and, reportedly, doused some of the area with water.

Outside the Mayfair Hotel, where the authorities hold regular news conferences, a woman pleaded Sunday for information on her husband.

“They have said nothing. We know nothing,” the woman said. “We’ve been told nothing.”

Another man demanded information from a government official. “We’ve been here for three days, and we’ve not had one piece of information,” he said.

Local officials have been hard-pressed to explain why authorities permitted hazardous goods warehouses so close to residential complexes and critical infrastructure, clearly in violation of the Chinese rule that hazmat storage should be 1,000 meters (yards) away from homes and public structures.

Homeowners of the nearby Qihang residential compound on Sunday unfurled banners demanding government accountability and proper compensations for their damaged homes. Many were wearing masks, and some had bandages, possibly over cuts.

Many people in the area suffered injuries from glass shattered in the huge fireballs that lit up the night sky Wednesday night.

On Sunday, Shi Luze, chief of staff for the People’s Liberation Army’s Beijing region, said authorities believe there were “several hundred” tons of sodium cyanide at the warehouse. He said that leaked chemicals were being neutralized and those still in packages removed from the site.

He also said that 3,000 soldiers had been dispatched to the disaster zone to clean up any leaks of hazardous materials.

Authorities temporarily detected the highly toxic hydrogen cyanide in the air slightly above safety levels at two locations, Tianjin environmental official Bao Jingling told a news conference Sunday morning. The contamination Saturday afternoon, at 4 percent and 50 percent above the safety level, was no longer detectable later Saturday, Bao said. “These levels are actually very low,” he said. Bao said the cyanide was yet to be detected in water samples.

Authorities were keeping residents, journalists and other people not involved in the disaster response outside a 3-kilometer (1.8-mile) radius around the site of the explosions in what media reports said was an operation to clean up the sodium cyanide.

The Tianjin blasts are among the deadliest industrial accidents in China in recent years. In June 2013, a fire at a poultry plant in the northeastern province of Jilin killed 121 people. In August 2014, a dust explosion at a metal plant in the eastern province of Jiangsu left 97 people dead.–Paul Traynor with Wong Wai-bor in Tianjin; and Didi Tang, Ian Mader and Christopher Bodeen in Beijing