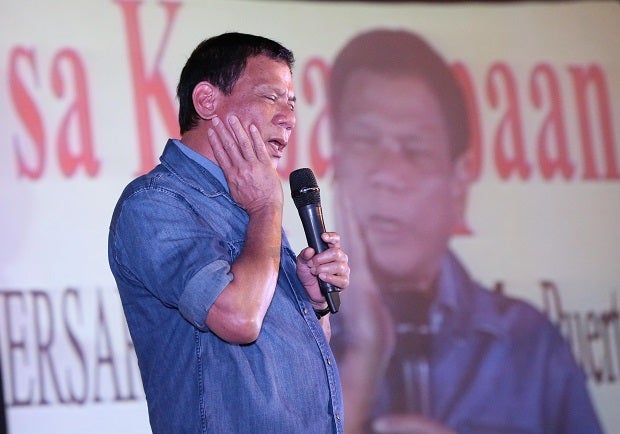 “Death penalty must be considered for plunder,” Duterte said at the sidelines of the general membership meeting of the Manila Bankers Institute at a hotel in Manila last week.

“Drastic measures must be done. Laws must be amended to make it easier to prosecute the corrupt,” he said.

Duterte said the money pocketed by corrupt officials could have been spent on programs to uplift the economic condition of the poor.

But he said while laws should be made tougher against corruption, values education should also be strengthened and made mandatory in both public and private schools to mold future leaders into being true public servants.

Duterte has always said he never spent a single centavo of government money for his own good or that of his family.

“I make sure that every centavo was spent to where they should be spent–  public good,” the feisty mayor said.

He said that as a mayor, he made sure that applications for business permits were approved within 72 hours to combat bribery or under-the-table deals.

“The mayor asks for nothing in return, be it a condominium unit or bags of cash. Because the mayor is not on the take, nobody else in the city government dares,” he pointed out.

Aside from toughening laws against corruption, Duterte said the present system of the government should be changed to federalism.

“While there is no perfect system of government, the unitary form that we have now has not worked well for us given the fact that we are an ethnically diversed country living in over 7,000 islands. The unitary form of government has centralized power in Metro Manila. It has also centralized corruption and prevented the growth of the regions, which are left with very little share of the national wealth,” he said.

He said federalism would not only minimize corruption but could “also prove to be a more viable option to address the restive Bangsamoro in the Southern Philippines who are seeking self-governance.”

Aside from corruption, Duterte said leaders should also fight criminality.

“I have no tolerance for criminals and the drug lords. They destroy our children. I believe that those who harm our children do not deserve to be part of society,” he said