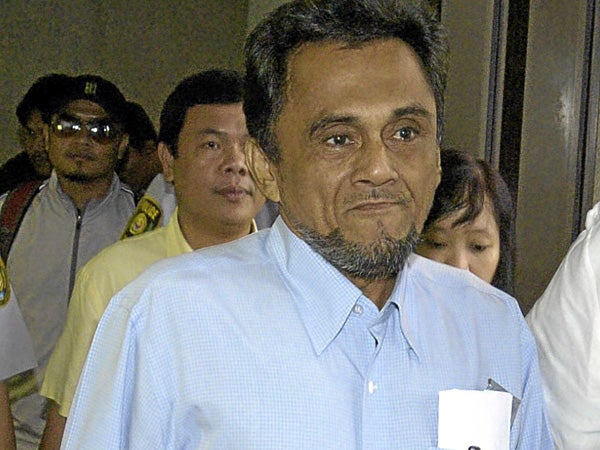 Alih, the former policeman who led a three-day siege of Camp Cawa-Cawa here in 1989 – which led to the deaths of General Eduardo Batalla, then Philippine Constabulary chief in Western Mindanao, and several other hostages – died inside the Philippine National Police (PNP) Custodial Center in Camp Crame, Quezon City, around 6:45 p.m. Friday.

The Alih clan then converged at the house of the former policeman’s sister in Camino Nuevo here before bringing his remains to the public Muslim cemetery in Barangay Caragasan around 4 p.m.

Casimiro said a convoy of 30 vehicles was seen joining the Alih’s cortage.

Senior Insp. Hingming Ladjaali of the Sinunuc police station said some policemen from Camp Crame and several local policemen secured the hearse that carried Alih’s remains towards the grave.

Ladjaali described the ceremony as solemn and it ended around 6 p.m.

Former 2nd District Representative Erico Basilio Fabian, who, as a journalist covered the Cawa-Cawa siege, said he prayed that “his soul rest in peace.”

“Life on earth is really temporary. What happened on January 5, 1989 was a lesson to be learned by all, especially the Armed Forces of the Philippines and the Philippine National Police,” he said.

In an interview in 2006, Alih said he had regretted the attack and said the deaths of Batalla and the other hostages were purely accidental.

Alih said it started with an argument with Batalla over his impending transfer to Manila. He was then being held for questioning over the killing of then city mayor Cesar Climaco.

He said he and Batalla had a shouting match because the general did not accede to his request not to be transferred to Manila.

That shouting match ended with Alih taking Batalla hostage, along with several others, including Batalla aide, Col. Romeo Abendan.

The military then launched an operation in a bid to save Abendan and the other hostages but the situation turned into a full-blown violence.

Alih, who escaped in the aftermath of the Cawa-Cawa siege, was later arrested and sentenced to 12 years imprisonment in Sabah, Malaysia, for illegal possession of firearms. His Malaysian jail sentence was cut short by four years in 2006 when he was deported to the Philippines to face charges for the Cawa-Cawa hostage-taking.