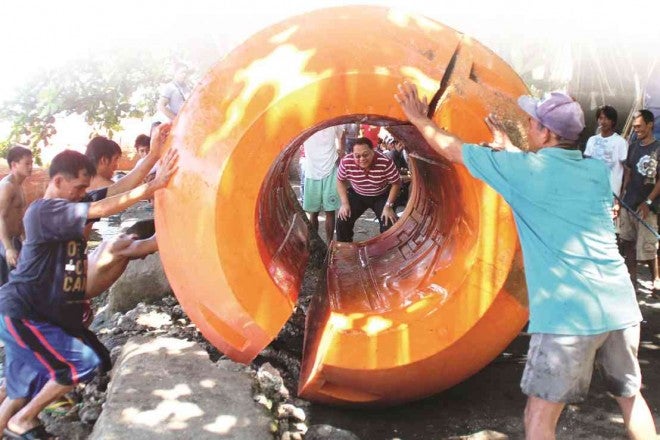 TO SHOW how big the dredging equipment that was found off the shore of the province is, Gov. Hermogenes Ebdane takes a peek through one that had been hauled ashore by fishermen. Militant groups have demanded that the equipment be preserved to be used as evidence against Chinese aggression in the West Philippine Sea. CONTRIBUTED PHOTO

OLONGAPO CITY—Fishermen are towing a kilometer-long dredge floater assembly, hoping to bring it to shore today, after they found it drifting at sea several kilometers from Iba, Zambales, on Friday night.

At least 30 fishermen from Barangay Sto. Rosario in Iba began towing the floater assembly on Saturday, according to Efren Medrano, chair of the Lanao-Bangan Fishermen’s Association.

The floater assembly was similar to those spotted drifting some 5.5 kilometers from the town of Cabangan, Zambales, on July 24. The first set of floaters spanned 1,000 meters long and bore Chinese markings.

Floater assemblies are interlinked buoys and metal pipes used in dredging equipment. They may have drifted from the West Philippine Sea, which has become the site of Chinese reclamation activities, according to Erwin de la Torre, a former executive of a company that manufactures dredging equipment.

He said a floater assembly is attached to a dredging machine that sucks up sand from the bottom of the sea.

Fishermen tried to dismantle the floaters recovered earlier to sell these for scrap but were stopped by Zambales officials, who had taken these into custody for their possible use as evidence against alleged Chinese intrusion into the West Philippine Sea.

Zambales Gov. Hermogenes Ebdane Jr., a former secretary of the Department of Public Works and Highways, said earlier that these floaters could be used to mark boundaries or to prevent strong waves.

He said these floaters could also serve as temporary barriers in case of an oil spill.

He also said the floaters are often used for large-scale reclamation activities.

The provincial government would supervise the auction of the floaters, he said, adding that they could be worth a “sizable amount.”

The fishermen said they believed the floaters could have been washed away from the Scarborough Shoal, also called Bajo de Masinloc or Panatag Shoal, one of the disputed territories in the West Philippine Sea. It is 230 km (124 nautical miles) west of Zambales.

Fishermen from Zambales and nearby Pangasinan have had encounters with Chinese Coast Guard vessels, which drove them from the shoal, a rich fishing ground for locals.

The party-list group Anakpawis urged authorities to preserve the floaters saying these could be used as pieces of evidence of Chinese incursion in the West Philippine Sea.

Ebdane had said the provincial government would auction off the floaters to raise funds for fishermen who lost their livelihood when Chinese vessels began to block their access to fishing grounds.

But Anakpawis Rep. Fernando Hicap urged Ebdane to turn over the floaters to the national government.

The fishermen said they saw similar objects near the area where China has been destroying reefs and reclaiming land.

“We advise our fellow fishermen not to tamper with or cannibalize the floaters because these would serve our struggle against China,” Hicap said in a recent statement.

The floaters stretch a kilometer long, with each device measuring 2 meters in diameter.

Ebdane has ordered the floaters to be kept and secured in the shores of San Agustin and Sto. Rosario villages in Iba, the capital town.

Ebdane said he asked fishermen not to sell the floaters immediately.

Hicap said government officials should instead offer fishermen other forms of assistance instead of selling the floaters.

“This is a national struggle, the national government should take responsibility for the impact of the dispute on its constituents,” he said.

Ebdane offered a contrary view when the issue was raised earlier this week.