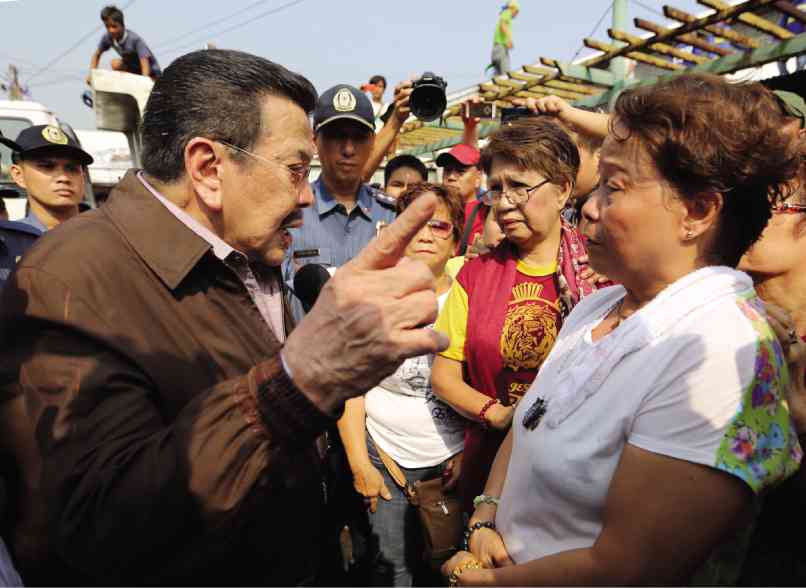 GUESS WHO WENT TO THE MARKET? Manila Mayor Joseph Estrada tries to convince Quinta market vendors of the benefits of its modernization. RAFFY LERMA

The head of the group representing market vendors in Metro Manila affected by the recent demolition and planned privatization of Quinta Market has sued Manila Mayor Joseph Estrada and other city government officials for graft and corruption and violations of the procurement law.

In a 10-page complaint received on August 10, Monday, by the Office of the Ombudsman, Juliet Peredo, president of the Manila Federation of Public Market Vendors Association Inc., said Estrada engaged into an “anomalous” and “irregular” joint-venture agreement (JVA) with the Marketlife Management and Leasing Corporation (MMLC).

Estrada and the respondents, she said, have committed manifest dishonesty, partiality and bad faith, or gross inexcusable negligence in the processing of the JVA.

“Mayor Estrada’s approval of the JVA is in conspiracy with private individuals, as well as public officials comprising the agreement, and the consenting and conspiring members of the city council who circumvented the national laws on procurement contracts to serve their personal interests, clearly constitute a violation of the Anti-Graft and Corrupt Practices Act by giving MMLC an unwarranted benefit, advantage or preference over the project without any competitive bidding or allowed alternative system of procurement,” Peredo said in the complaint.

Peredo contested that the JVA, signed last June 15, occurred without bidding and public consultation in awarding a multi-million contract to MMLC worth P250 million.

The JVA, in compliance to Ordinance 8346, allows for the “redevelopment, operation and management of Quinta Market for a period of 25 years commencing after the sales and marketing pre-launch period, renewable upon mutual agreement of the parties.”

Included in the complaint are members of the joint-venture selection committee including the secretary to the Mayor, City Legal officer, the City Treasurer, City Legal officer, the City Planning and Development officer, City Engineer, two representatives from the Sangguniang Panglungsod and members of the MMLC board president Carlos Ramon Baviera, and members Patrick Herlihy, Rolando Evangelista, Jacques Ian Lee and Joseph Michael Lagman.
Incompetent, “fraudulent”
Peredo also charged the respondents for violating RA 9184 or the Government Procurement Reform Act and RA 6957 or the “Act authorizing the Financing, Construction, Operation and Maintenance of Infrastructure projects by the Private Sector, and for other purposes.”

In her complaint, she said the JVC was done hastily and violated the ordinance as MMLC “has no track record, much less, adequate record of experience in the concerned industry and does not have the ability and financial base” to undertake the project.

Peredo said Estrada approved the MMLC’s unsolicited proposal on October 20, 2014, a month before MMLC was incorporated on November 11, according to a Security and Exchange Commission Records.

“It was impossible for any fair-minded individual under Ordinance no. 8346, to even think that the approval and execution of the JVA was attended by regularity,” Peredo said in the complaint.

MMLC, with only a paid capital of P3, 125,000, also has no capacity to “build, operate and manage a Quinta market with a construction cost of P90M and a working capital of P85M.

“What’s worse is that MMLC also used a fictitious address of Unit 2018 Mayfair Tower, Ermita, Manila, in its official document,” Peredo said in her complaint.

As of press time, the Office of the Mayor, through its public relations officer Diego Cagahastian, said they have not received any complaint.

The federation of market vendors include 17 public markets in Manila.

Although admitting they are fighting “big people,” Arnaldo Chico, president of the Cooperative Association of Quinta Market, said they have exhausted all measures to have their voices heard.

“Masyado na kaming inaapi. We are against privatization. With the privatization comes increase in rental and other maintenance fees,” he said.

Chico also lamented the fact they will will not have voice in the so-called joint partnership agreement, as there will be three Market Life representatives, two representatives from Manila and only one from the Federation who will represent the vendors during meetings. TVJ