The orders to size up the leading lights in next year’s presidential election came from on high: Eduardo “Danding” Cojuangco and his chief executive officer in San Miguel Corp., Ramon Ang.

Sen. Grace Poe emerged from the meeting Tuesday night with the Nationalist People’s Coalition (NPC) with encouragement and support from individual party members.

The NPC would decide as a party who to support in 2016, but certain members have indicated to her their intent to back her up.

“I think it’s more their individual capacities, like a lot of members of the NPC that I’ve known have been very encouraging,” she told reporters after the meeting when asked if the party pledged or promised anything to her in relation to the elections.

“Just ask them because it’s hard to say who is committing,” she added.

Asked how many had committed, she said there appeared to be many, but that it would be better to ask the members about it.

The NPC has two senators, at least 40 House of Representatives members, 14 governors, 22 city mayors, and hundreds of municipal mayors. It is the second-largest political party, after the Liberal Party (LP) of President Aquino.

In the evening, the NPC hosted Poe and Sen. Francis Escudero at the NPC headquarters in Cojuangco’s sprawling estate on Balete Drive.

Poe arrived around 8:25 p.m., a few minutes before Escudero showed up.

Poe also said there were no formal talks about the matter on Tuesday night. What took place was more of catching up with each other.

She would rather not speak about it because she respects the party and it would still need to consult its members.

Asked if members had encouraged her to run, she replied: “Yes, I think a lot of them were very encouraging and supportive.”

When pressed on whether the NPC members were supportive or really asked her to join the 2016 race, she said it was better to just ask them.

She also said that while the gathering was for socializing, she and the members discussed problems concerning their regions, such as inadequacies in irrigation or the airport, to determine what could be done in the budget season or perhaps the next six years.

The NPC members, most of whom are local officials, know the problems at the grassroots level, she said.

She said she was the one who asked them what could be done to address the issues in their localities.

Escudero, asked in what way the NPC was encouraging, noted once more the statement of party president and Isabela Rep. Giorgidi Aggabao that many members of the party are leaning toward supporting Poe if she would run for President.

At least 26 congressmen and five governors attended the dinner, but none of the Cojuangco clan was there, according to Sen. Vicente Sotto III.

“We are trying to get the pulse of the party on their tandem,” Sotto said.

Poe and Escudero described the event as a “social” gathering, but an NPC member, Valenzuela Rep. Sherwin Gatchalian, said the party was expected to consult members on their sentiments on the 2016 polls.

Escudero told reporters hours earlier that the NPC members might want to get to know Poe better as the party pondered whom to support in next year’s polls.

While many NPC members have said they were inclined to support Poe, many have yet to meet her, he said.

“Maybe they want to get to know Senator Poe personally to help them in the party’s decision, because the NPC itself has no official decision who to support in 2016,” Escudero said.

He said that while political talk could not be discounted, there was unlikely to be any definite decision since Poe herself had yet to announce or finalize her plans for 2016.

According to Davao del Sur Gov. Claude Bautista, Cojuangco and Ang directed them to sit down with Roxas to hear his political plans as part of the exploratory talks between the country’s two largest political groups.

“They instructed us to come here … and speak with Secretary Mar. That’s why NPC congressmen and local officials are here,” Bautista told reporters.

“As of the moment, there is no final instruction coming from boss Danding and boss Ramon. We’re just waiting for the marching orders. As good soldiers of the party, we will just abide by what the party wants,” he said. 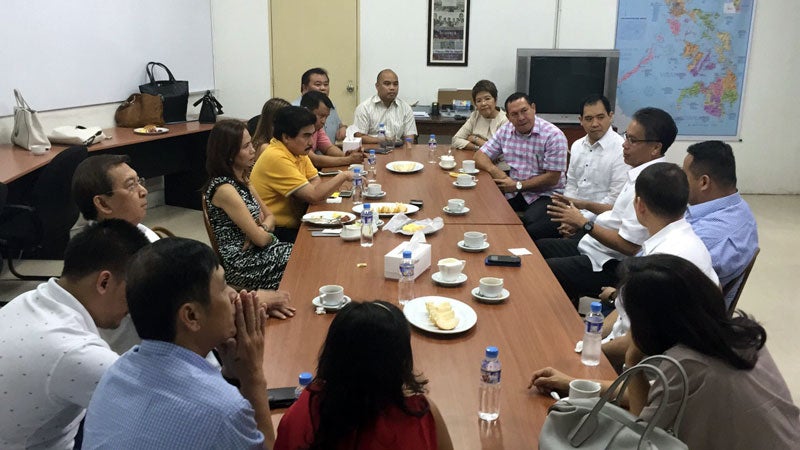 COURTING SEASON BEGINS Interior Secretary Mar Roxas, the standard-bearer of the ruling coalition led by the Liberal Party (LP) for the 2016 elections, talks with members of the Nationalist People’s Coalition (NPC) at the LP headquarters in Cubao, Quezon City. The NPC members were reported to have been told by business tycoons Danding Cojuangco and Ramon Ang, SMC president, to meet with Roxas. PHOTO COURTESY OF REP. DAN FERNANDEZ

“This is just part of the initial talks. We still have to discuss certain matters. Maybe there would be another meeting after this,” Bautista said.

According to Mendoza, it was Roxas himself who sought them out as he asked the NPC congressmen for an opportunity to explain to them his political platform.

“Secretary Mar asked us to support him. We told him that we still have to consult our members,” Mendoza said.

“But NPC members who want to join him are free to do what they want. At the end of the day, the party’s decision will ultimately matter,” he added.

Mendoza said the NPC contingent informed Aggabao, that they would meet with Roxas, who had been endorsed by Mr. Aquino as the presidential candidate of the LP-led administration coalition.

“I thought it was important for NPC to go not only to listen to Secretary Mar but prevent or repair a rift between the parties that, I would stress, is only about the elections, and not the larger commitment of NPC to continue supporting the President and his programs,” Aggabao said in a text message to reporters.

Aggabao earlier said the party leaders and most of its members were inclined to support Poe, the front-runner in the presidential preference surveys, although the party had yet to formally convene to select its candidate.

“Secretary Mar will make his point; the message will be clearly received. The next move would be NPC’s to make,” he said.

Mendoza, who described the meeting as a “meet and greet” with the interior secretary, maintained that the NPC had yet to declare its support for Poe and Escudero, her perceived running mate.

“The NPC is a member of the (administration) coalition. We just wanted to hear what (Roxas) has to say. So far, we have been talking to other possible candidates in 2016,” Mendoza said.

“Secretary Mar has many friends and supporters in the NPC. But we’re still waiting for the party’s decision just like most of our members,” he added.

Both Mendoza and Bautista said NPC members, including some 2,000 incumbent local officials, would throw their support behind whomever Cojuangco would decide to back in next year’s general elections.

“We will bow to (Cojuangco’s) decision,” the governor said.–With reports from DJ Yap and Christine O. Avendaño