A place to forget the rest of the world 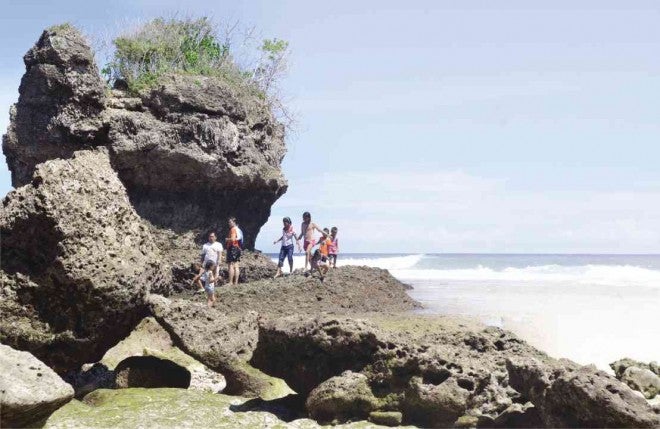 TOURISTS walk past rock formations after taking a dip in the waters of Governor Generoso town. GERMELINA LACORTE/INQUIRER MINDANAO

BY THE USUAL tourist’s standard, Cape San Agustin may well be considered off-the-beaten track. Only a few people know that such rugged beauty exists, and what used to be the pot-holed 60-kilometer stretch of road from Governor Generoso in Davao Oriental province to the place is still being paved.

Once you reach Sitio Talisay in Barangay Lavigan, a four-hour ride from Davao City, you’ll come upon that strip of land jutting out to sea to form the southeastern-most point of Davao region, and then, you’d forget everything. All thoughts get swept away, along with the strain of deadlines and stress in the city.

Three lighthouses stand like sentries over where the Davao Gulf meets the Celebes Sea. Feel the waft of breeze which has been there for centuries.

“Once you come to Cape San Agustin, you will keep coming back,” so says Mayor Vicente Orencia, who has observed the increasing number of visitors coming in cars to stay for the weekend.

Orencia talks of a delicious fish called red sarami, caught by daring fishers in waters the locals call Pacific Byuda (Widow) along the sea border with Indonesia. The dangerous current can kill an unsuspecting fisher at the slightest mistake, rendering the fisher’s wife a widow.

“We’re not afraid of typhoons because we are protected by mountain ranges,” says Clinton Polancos, who organized a group of scuba divers frequenting the cape.

Polancos recalls that at the height of Typhoon “Pablo” (international name: Bopha), there was hardly any wind blowing in Governor Generoso.

“While the typhoon raged in Baganga and Cateel, it felt here just like how we feel it today,” he says.

“Here on one side is the Pacific Ocean, on the other side is the Davao Gulf,” he adds, gesturing with his hands.

“Although we have July to August as habagat months, which we consider rough season, after that, we have nothing,” he says.

Locals talk about the first Mass that Fr. Francis Xavier celebrated in Mindanao on a rock formation called “the altar” nearby, though this claim has been refuted by scholars.

Orencia points to the north, “There is the Pacific, straight from the Celebes sea, on the left you’ll come to Papua New Guinea, the Seven Islands, the Pacific Byuda, at the boundary of Governor Generoso and

“We want to package our town as a Sunday family getaway, where they can go island hopping,” he says.

Climbing the top of the 80-feet lighthouse tower gives a sweeping view of the sky and the sea. All the cares in the world vanish from here.

Now, Governor Generoso town, where Cape San Agustin belongs, has some 52,700 people living in 20 barangays, 14 of them along the coastline. It also shares part of the Unesco World Heritage Mt. Hamiguitan, with the nearby San Isidro and Mati City.

In October, migratory bird species escaping the winter in Siberia and China start to arrive to roost. “They come to startle local people,” Orencia says.

“Sometimes, there are just too many of them, but having them around makes us very thankful because it only comes to mean our place is still safe and intact, that nature has not yet been damaged yet, that there are still lots of food for them to thrive on,” the mayor adds.