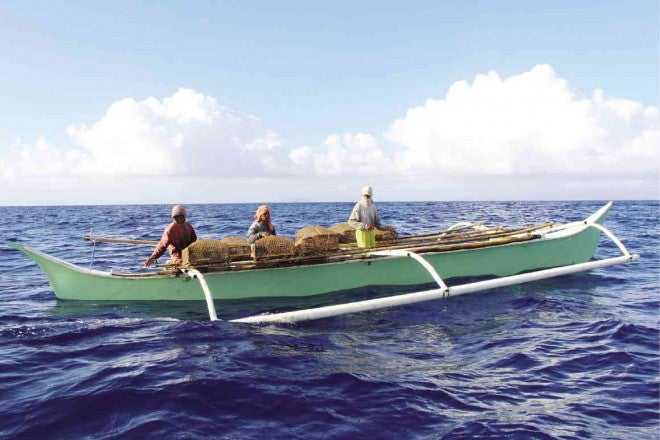 FISH traps, called “bobo,” are lowered by fishermen in the waters of Socorro, Surigao del Norte province, one of the traditional deep-sea fishing methods practiced by the locals. FRED ABREA/CONTRIBUTOR

SA LAWUD itagak, sa bukid pangitaon. (Drop it into the deep sea, but look for it in the mountains.)

This is how 65-year-old fisherman Mamelito Quisada describes the traditional deep-sea fishing method practiced by his community in Del Pilar village on the island town of Socorro, Surigao del Norte province.

Quite archaic, but undoubtedly, it works.

Fishermen go some 10 kilometers out into municipal waters facing the Pacific Ocean and lower a line of 10 to 14 “bobo” traps, or “fish pots,” onto the seabed. They return to the spot on the morning of the third day and haul in their catch.

What is admirable is their level of estimation: There are no poles or buoys to indicate where the traps are laid, as these are prone to theft by unscrupulous fishermen.

Instead, they look at a specified point on the main island—say, any high peak—as if finding coordinates without any global positioning system (GPS) tool, stop rowing their bancas (boats), and start trawling the waters with a hooked bamboo pole. Minutes later, the traps are raised and they start unloading the catch. Again, they lower the traps for the next harvest.

“We always find it (line of traps), no matter what,” says Quisada, who grew up knowing the method by heart. “It may be traditional, but it is efficient and has been practiced by our community since the time of our father’s father.”

The bobo device is made of woven bamboo and has a trap-like entrance, which has a sharp edge to prevent fish from getting out once snared. The fisherfolk call it “bobo,” which in Filipino means “dumb,” to describe the captured fish.

Ten to 20 kilos of fish are caught in the trap that the fishermen sell for P70 to P100 per kilo, depending on the variety. “Once it reaches the market, we usually sell out,” Quisada says, adding that a portion is set aside for the family’s daily meal.

In 2010, three fisherfolk associations were able to access a P250,000 funding from the livelihood component of the Mindanao Rural Development Program (MRDP) to purchase motorized bancas for fishing, which would help hasten the fishermen’s job and lessen their time at sea, and more bobo traps. The World Bank funded the program.

The traps last for three months. Association members either buy assembled ones or make these themselves from bamboo slats. A 14-piece string of traps is sold at P2,200 to P2,300.

In one case, a group introduced plastic-based fish pots but found these to be inefficient and not ecology-friendly.

The fishermen have also raised their income through boat rentals, which range from P200 to P220 a day. They also established a “sari-sari” store out of the livelihood package, selling fuel for motorized bancas.

Jurlyn Ubos, president of the Mauswagon (progressive) association, says the program has somewhat eased their lives during the monsoon months, when fishermen have to resort to planting crops and other farming activities. “Some of the extra fish catch are also turned into dried fish and are sold,” she says.

Eugene Ramirez, president of the Makugihon (hardworking) group, hopes to acquire additional motorized bancas, “especially for the sons of fishermen who have started to fish.”

The local government of Socorro has banned illegal fishing methods, which is why traditional but sustainable methods, like bobo fishing, are strongly encouraged and supported.

Another MRDP-supported livelihood project implemented by the local government is “lapu-lapu” (grouper) culture, which also benefits three other grassroots organizations.

“While MRDP livelihood projects have improved the lives of the beneficiary-families, these have also raised their awareness on the wise use of our natural resources,” says Reynante Canta, municipal planning and development officer.

“Communities now understand more the importance of sustainable development, where their livelihood comes from,” Canta says.