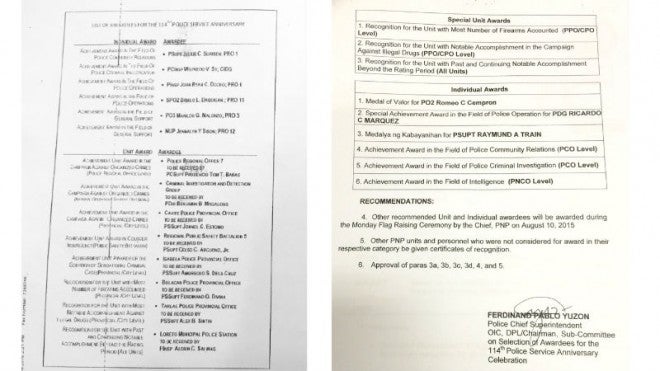 First photo: List of awardees in the invitation from the PNP. Second photo: Official memorandum from the PNP Directorate for Plans.

Has President Aquino snubbed the Special Action Force troopers involved in the Mamasapano operation yet again?

The names of two SAF officers included in the official memorandum identifying the police personnel to be awarded by President Benigno Aquino III during the 114th police service anniversary on Friday morning were nowhere to be found in the anniversary program. A government official told INQUIRER.net on Thursday that the names had been ordered removed.

The names of slain SAF officer PO2 Romeo Cempron and Mamasapano survivor Superintendent Raymund Train, who were to receive two of the highest service medals of the Philippine National Police, were allegedly taken out of the roster of awardees at the last minute.

The PNP memorandum on the “Result of the Selection of Awardees” that INQUIRER.net obtained showed that Cempron was to have been posthumously awarded the Medal of Valor (Medalya ng Kagitingan) while Train was to have received the Medalya ng Kabayanihan (PNP Distinguished Conduct Medal). But in the program advisory released by Malacanang and in the official program itself, Cempron and Train’s names were not included in the list.

The head of the PNP Intelligence Group, Chief Superintendent Fernando Mendez Jr., the official who provided the intelligence packet used in the ill-fated raid last January 25, was also said to be among the awardees but was also not included in the program.

The official, who requested anonymity because of the possibility of reprisal, said that Cempron’s widow Christine was informed last weekend that her husband would be honored by the President during the PNP Day at the national police headquarters in Camp Crame.

“But in the same week, there was a verbal instruction from the Presidential Management Staff to the PNP to remove the Mamasapano awardees from the program,” he said.

“The President did not want to bring back the memories of the Mamasapano [encounter].”

The official said the order was “still vague” as it did not say whether the awardees would still receive their medals on a later date or if the citations would be rescinded.

Aquino was criticized for failing to acknowledge–or at the very least mention–the SAF 44 in his State of the Nation Address last July 27.

Some SAF families were said to have been offended by Aquino claiming the killing of terrorist Zulkifli Bin Hir alias Marwan under his watch without thanking the SAF men who sacrificed their lives in the process.

The President’s absence from the arrival honors for the SAF 44 at Villamor Airbase in January also drew widespread criticism from the public, especially because he chose to stick to his original schedule and attend the inauguration of a car manufacturing plant in Laguna.

Cempron was among the 44 counterterror commandos killed in the law enforcement operation in Mamasapano in Maguindanao province, in the attempt to arrest one of the US Federal Bureau of Investigation’s most wanted terrorists, Marwan, and his accomplices Abdul Basit Usman and Amin Baco.

The Malaysian bomb-maker, who had a $5 million bounty on his head, was killed in the operation while Usman and Baco, who were believed to be responsible for several bombing incidents in Mindanao, managed to escape. Four months after, Usman was killed by Moro Islamic Liberation Front members in Guindulungan town.

The incident, labeled by the Senate as a “massacre,” is the single deadliest police operation in the recent history of the 160,000-strong PNP.

The Senate also said Aquino was “ultimately responsible” for the high-risk mission.

During the deliberations for Cempron’s medal of valor, PO2 Christopher Lalan, the lone survivor from the 55th Special Action Company, said Cempron told Lalan to escape while he stood up to provide cover. He was shot to death.

Train led the 84th Special Action Company known as Seaborne that served as the assaulting force that subdued Marwan in his hideout. Nine of the 36 Seaborne commandos perished in the 12-hour gun battle.

Chief Superintendent Augusto Marquez of the Directorate for Investigation and Detective Management and a member of the deliberation board earlier said that no less than the President will give Cempron’s family the medal in a ceremony.

Another police source said the SAF shouldered the travel fare for Christine and her family from Leyte as well as the cost of hotel accommodations in Manila. The SAF even bought them Filipiniana attire in preparation for the awarding — only to find out that they will not be joining the program.

“It was really disappointing for them. They’ve prepared already. They were even excited to attend the ceremony,” said the source, who also declined to be identified, also for fear of reprisal.

All SAF troopers who died and who were injured in the encounter were recommended for the highest decoration for intrepidity and gallantry in action.

Christine, a pediatrician, heard the news that her 33-year-old husband was the first among the SAF 44 to receive the valor medal on her birthday last July 8.

Receiving the highest PNP distinction would mean Cempron’s family will receive a monthly cash allowance. His children may also enter Philippine Military Academy (PMA) or the Philippine National Police Academy (PNPA) without taking the entrance examination. They are also entitled to scholarships in private universities.

Last July 14, the steering committee for the PNP anniversary led by Deputy Director General Danilo Constantino met for the first time to discuss security arrangements, logistics, activities and awardees for the event.

In the minutes of the first committee meeting, Constantino, the chief of the PNP directorial staff, said he wanted to “fast track” the processing of the two highest awards for the officers involved in the Mamasapano operation.

He said the PNP service anniversary was a “good venue” to highlight the bravery of the SAF men who laid down by their lives for the mission.

It was not to be, however. On PNP day, which Presidents traditionally attend, no SAF commandos were feted for their participation in the deadly police operation that took 44 of the PNP’s men. Julliane Love De Jesus

The PNP Medal of Bravery requires ‘gallantry in action’