Wing part may be confirmed as from MH370 this week—Australia 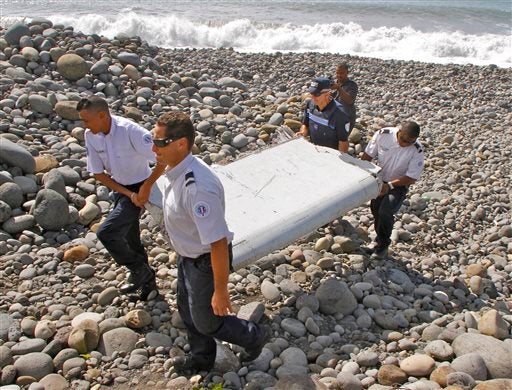 In this July 29, 2015 file photo, French police officers carry a piece of debris from a plane in Saint-Andre, Reunion Island. If a wing fragment found in the western Indian Ocean turns out to be part of missing Flight 370, experts say, there are probably other pieces of the aircraft that floated off rather than sinking to the bottom of the ocean. AP FILE PHOTO

Sydney—Australia on Wednesday said official word on whether a washed-up plane part is from flight MH370 is expected this week, while reiterating it will continue hunting for the main debris field in the southern Indian Ocean.

Technical experts in France were to begin examining the flaperon, already confirmed to have come from a Boeing 777, in Toulouse later Wednesday after it washed up on the Indian Ocean island of La Reunion.

“Malaysian and French officials may be in a position to make a formal statement about the origin of the flaperon later this week,” said Australian Deputy Prime Minister Warren Truss.

He added that an expert from the Australian Transport Safety Bureau (ATSB), which is coordinating the search for the Malaysia Airlines jet, would be involved in examining the wing part when the case containing it is opened.

French and Malaysian experts, Boeing employees and representatives from China will also be on hand to determine if it comes from the jet that vanished en route from Kuala Lumpur to Beijing with 239 people on board in March last year.

Truss added that Australia’s national science agency, CSIRO, had confirmed that drift modelling showed debris could have been carried by wind and currents to La Reunion, some 4,000 kilometers (2,500 miles) from the region where MH370 was thought to have gone down.

“I am advised that Australia’s CSIRO drift modelling, commissioned by the ATSB, confirms that material from the current search area could have been carried to La Reunion, as well as other locations, as part of a progressive dispersal of floating debris through the action of ocean currents and wind,” he said.

“For this reason, thorough and methodical search efforts will continue to be focused on the defined underwater search area, covering 120,000 square kilometers, in the southern Indian Ocean.”

Australia has been leading the hunt for the plane, with satellite and other data pointing it to coming down in the southern Indian Ocean.

Ships have been scouring more than 50,000 square kilometers (19,000 square miles) of deep ocean floor for evidence, although none has so far been found. Authorities plan to search a total of 120,000 square meters.

Read Next
Angara renews call to cut low-salaried employees’ tax
EDITORS' PICK
US, Indonesia commit to South China Sea defense in ‘strategic dialogue’
Why REIT investment makes sense
The vivo V21 drops its price to equip the influencer in you
Smart reaffirms dominance as the Philippines’ fastest 5G mobile network
Aklan gov to request for ECQ if COVID-19 cases will further increase
Patients ‘almost die’ waiting for Kalibo hospital beds to free up, says mayor
MOST READ
‘Hatid-sundo’ for APORs not allowed during ECQ — PNP
Pacquiao seeks PNP’s help, wants ‘forged’ PDP-Laban memo probed
Anxiety over paltry lockdown aid: ‘We will die of hunger’
‘At peace’ with effort, EJ Obiena establishes himself among PH’s greatest ever
Don't miss out on the latest news and information.