Binay: I told the President not to become a Marcos | Inquirer News
Close
menu
search

Binay: I told the President not to become a Marcos 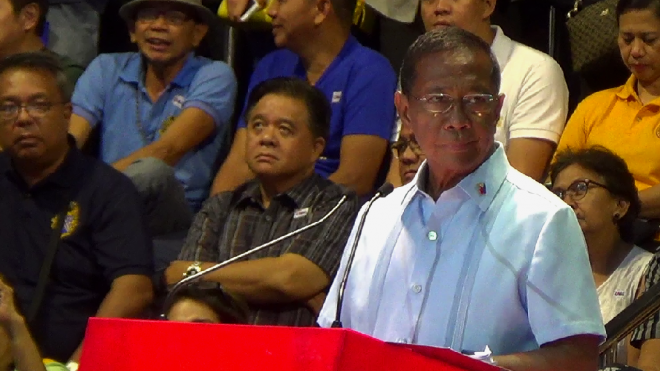 He had warned President Aquino to stay off the case of former Chief Justice Renato Corona, lest he become a dictator like ousted President Ferdinand Marcos, Vice President Jejomar Binay said.

Binay on Tuesday made the rounds of TV and radio stations, including dzIQ or Radyo Inquirer, to respond to criticisms hurled against him a day after he delivered his “true” State of the Nation Address (Sona), a scathing assessment of the five-year administration of President Aquino.

Corona was impeached from office by a vote in Congress that was widely seen as being influenced by Aquino, who had earlier made plain his displeasure at the midnight appointment of the Chief Justice by his predecessor, former President Gloria Macapagal-Arroyo.

According to the impeachment complaint, Corona failed to disclose to the public his statement of assets, liabilities and net worth as required under the Constitution.

That was one occasion when he spoke up and went against the President’s policies and pronouncements, Binay said, adding that while he was a team player and played along, he also voiced out his objections when it became necessary.

Binay was responding to Palace spokesman Edwin Lacierda’s observation that the Vice President had been part of the administration he had lambasted in his speech, and that he had said nothing to right what he now considered were instances of ineptness under President Aquino.

The Vice President also recalled telling Aquino not to become another Marcos. “I told him, you know President Marcos endured because he had made laws to give legitimacy to what he has done. But this is not a good precedent. It seemed to be part of (their plan) to be in power for 18 years. Now, under President Aquino, (the plan seems to be that) the institution of the judiciary will be destroyed, the institution of the Vice President will be destroyed and on the third phase, they will establish a dictatorial government.”

Binay said he was quoting presidential ally, Rep. Edgar Erice, as having said of President Aquino: “You have to be in power for 18 years.”

“So it’s not true that I don’t make suggestions to him. But you have to know Noynoy,” he said in a radio station. “Most of the time when he makes a decision, that’s it.”

Binay also denied that he had made political capital of the SAF 44 when he paid homage to them in his “true” Sona.

“What is the politicking there?” he said, adding that it was only necessary for the nation to recognize the heroism of the men who were killed in a police operation against international terrorists in January in Mamasapano, Maguindanao province.