Christmas in jail for Arroyos seen 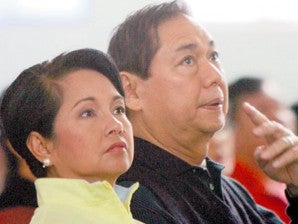 Will it be Christmas in jail for former President Gloria Macapagal-Arroyo and her husband, Jose Miguel “Mike” Arroyo?

Commission on Elections Chairman Sixto Brillantes on Wednesday suggested this possibility, saying the joint panel of the Department of Justice and the Comelec investigating the massive poll fraud in 2004 and 2007 was expected to wrap up its work in December.

Brillantes was at the Senate Wednesday for his fourth confirmation hearing. After he was finally confirmed by the Commission on Appointments, he told reporters in an ambush interview that he and Justice Secretary Leila de Lima had agreed to complete the investigation “in a few months.”

“It turns out that at the rate we are going, we can finish it by December… We can finish this before Christmas,” he said in a mix of English and Filipino.

Brillantes warned on Tuesday that Arroyo and her husband, could be detained without bail if the joint panel found probable cause that they were behind the purported rigging of the 2007 senatorial elections.

He said the “firsthand account” of former Maguindanao Administrator Norie Unas on election fraud could help pin down the Arroyo couple.

“You know, what we’re doing is not all that serious. We’re only determining probable cause; we’re not looking for the guilty,” Brillantes said Wednesday, adding:

“Probable cause is simply this: if there’s prima facie evidence, substantial evidence, we can file the case. I said on Tuesday that if we find probable cause and file the charge of electoral sabotage, that’s not a bailable crime, so it’s immediate detention. We should be finished even before [Christmas].”

Asked by reporters if his statement meant that Arroyo would spend  “Christmas in jail,” Brillantes replied: “This is a continuing investigation. If we find a prima facie case, we file [the charges].

“If we file a prima facie case against one [person], we file. And we continue with the others.”

Asked if this meant that the joint panel would finish what it was assigned to do before Christmas, Brillantes said: “The entire thing, yeah, [including] the 2004 and 2007 [polls].

“Finished at our level. For now we’re fact-finding. Then we’ll go to [the] preliminary investigation proper, and after that, filing in court already. Then our work is done. When the case is filed in court, our work is finished.”

When asked a second time if his pronouncements could indicate that the former President, specifically, might spend the holidays in jail, Brillantes hedged.

He said that Arroyo might be able to seek an exemption, that he should not be made to say that she would be jailed, and that probable cause would have to be studied.

At the start of Brillantes’ confirmation hearing Wednesday, Senate President Pro Tempore Jose “Jinggoy” Estrada asked him how he was able to make sure that Unas, a former aide of then Maguindanao Governor Andal Ampatuan Sr., would be a credible witness against the Arroyos.

“He should be credible since he has been with the Ampatuans since 2001,” Brillantes said. “He was a [Commission on Audit] administrator of the Ampatuans… We already interviewed him several times before we actually drafted and finalized his affidavit. He’s a very intellectual guy, an engineer by profession, and able to draft his own affidavit.”

Brillantes then repeated Unas’ story that he was in Malacañang twice to accompany Ampatuan when then President Arroyo “made the declaration” to tailor the results of the 2007 senatorial elections and ensure the victory of the administration’s 12 candidates.

Asked whether Unas’ statement could serve to build an “airtight” case against Arroyo, Brillantes said: “This is a direct statement coming from a witness … that used to be a kakampi (an ally).”

He clarified that at this point, the joint panel of the justice department and the Comelec were no longer interested in who won in the 2004 and 2007 elections.

“We are here to investigate the criminal aspect. We are not interested in who won in 2004 and 2007. The important thing right now is [who can be jailed, who committed irregularities in the elections],” he said.

Brillantes said he wished that those who were with Unas in Malacañang when the order to produce a 12-0 sweep was given would now surface and back his statement.

“If you ask me, the only people who can corroborate Unas are the same people in Malacañang at that time—mga kakampi pero baka gustong magbagong-buhay (former allies who may want a change of life),” he said.

Brillantes said he seemed to recall that staunch Arroyo ally Prospero Pichay was in Malacañang at that time.

“Yeah, he should change,” Brillantes said.

Pichay, recently dismissed as head of the Local Water Utilities Administration, was part of Arroyo’s senatorial team in 2007.

Brillantes also said he would welcome Senator Aquilino “Koko” Pimentel III, a victim of poll fraud in 2007, as a witness in the joint panel’s inquiry.

Pimentel said in a separate interview that he was in the process of completing the documents that he planned to submit to the joint panel.