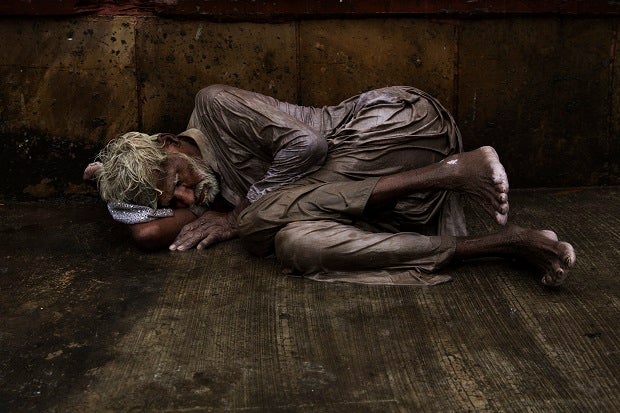 An Indian homeless man tries to sleep on a wet street during monsoon rains in New Delhi, India, Saturday, July 11, 2015. Tens of thousands of impoverished people live on the streets in New Delhi, where they struggle with constant hunger and extreme weather while sleeping nights next to busy intersections and roads. Some make camp in crowded alleyways, in abandoned lots or by garbage dumps. Many come from countryside villages in hopes of finding better economic opportunities in the Indian capital. AP

UNITED NATIONS, United States — The 193 member states of the United Nations have reached agreement on a new development agenda for the next 15 years that calls for eradicating poverty and hunger, achieving gender equality, improving living standards and taking urgent action to combat climate change.

The draft agreement reached Sunday evening outlines 17 goals with 169 specific targets on issues ranging from ending poverty “in all its forms everywhere” to ensuring quality education and affordable and reliable energy, and protecting the environment.

“We can be the first generation that ends global poverty, and the last generation to prevent the worst impacts of global warming before it is too late,” Secretary-General Ban Ki-moon told reporters Monday.

The document — called “Transforming our World: The 2030 Agenda for Sustainable Development” — will be adopted at a U.N. summit just before the annual meeting of world leaders at the General Assembly in late September. More than 160 world leaders are on the provisional speakers list for the three-day summit starting Sept. 25 which was released Monday including the presidents of China, Russia, Iran and France.

Ban said “the goals represent a ‘to-do’ list for people and the planet.”

“They address the requirements for all humanity to be able to live decent lives free from poverty, hunger and inequality,” he said. “They commit all of us to be responsible global citizens, caring for the less fortunate as well as for our planet’s ecosystems and climate action on which all life depends.”