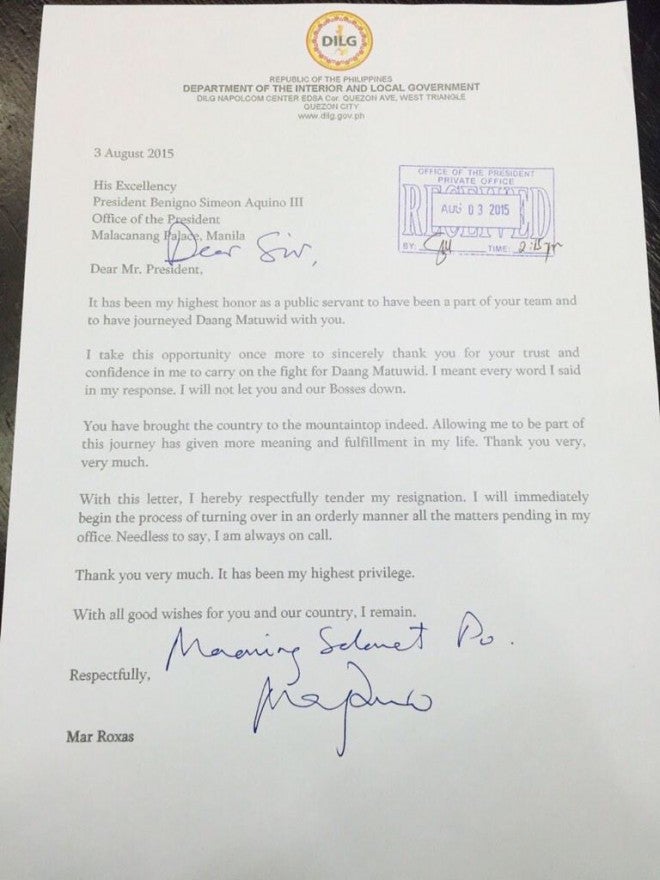 Interior Secretary Manuel “Mar” Roxas II formally tendered his resignation as the head of the Department of Interior and Local Government on Monday.

In his resignation letter, a photo of which was sent to the media, Roxas said he would immediately begin the process of turning over his duties as DILG secretary.

In a speech at the 111th annversary of the Bureau of Internal Revenue Monday morning, President Aquino III asked Roxas to “stay a little longer” in his post while there were still tasks that have to be finished.

In a statement, Executive Secretary Paquito Ochoa Jr. said the President has convinced Roxas to stay on, citing the need for the DILG Secretary to tackle several urgent concerns at the agency and ensure a proper transition in the DILG before stepping down.

Earlier Monday, Roxas bade farewell to the members of Philippine National Police and the officials and employees of DILG.

“With this letter, I hereby respectfully tender my resignation. I will immediately begin the process of turning over in an orderly manner all the matters pending in my office. Needless to say, I am always on call,” he said.

Roxas also said it has been his “highest honor as a public servant” to have been a part of the Aquino administration.

“I take this opportunity once more to sincerely thank you for your trust and confidence in me to carry on the fight for Daang Matuwid. I meant every word I said in my response. I will not let you and our bosses down,” he said.

“You have brought the country to the mountaintop indeed. Allowing me to be a part of this journey has given more meaning and fulfillment in my life. Thank you very, very much,” he added.

Roxas, at the bottom of the letter, wrote a handwritten note “Maraming Salamat Po” with his signature.