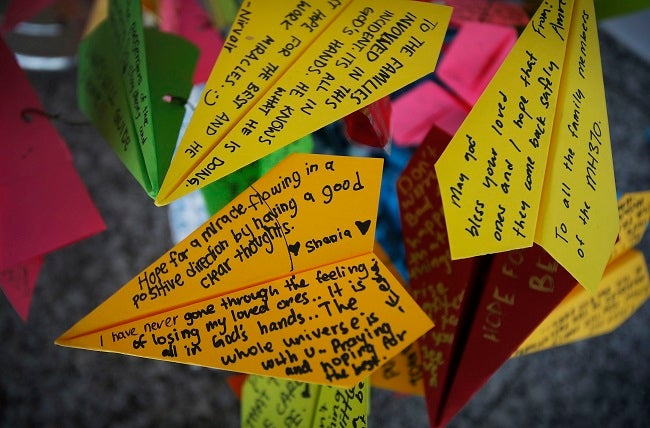 FILE – In this March 15, 2014, photo, paper planes with personalized messages dedicated to people involved with the missing Malaysia Airlines jetliner MH370, are placed at the viewing gallery of Kuala Lumpur International Airport, in Sepang, Malaysia. Part of the mystery of what happened to a Malaysia Airlines plane that vanished last year may be solved with air safety investigators confident that debris found in the Indian Ocean is a wing part unique to the Boeing 777, the same model as the missing jet, a U.S. official said Wednesday, July 29, 2015. Air safety investigators  one of them a Boeing investigator have identified the component that was found on the French island of Reunion in the western Indian Ocean as a “flaperon” from the trailing edge of a 777 wing, the U.S. official said. (AP Photo/Wong Maye-E)

PETALING JAYA — A plane door has been found washed up on Reunion Island, Sky News reported on Sunday.

According to Sky News’ David Bowden, the object was discovered in a different location to the flaperon which prompted speculation that it was from Malaysia Airlines Flight MH370.

Experts confirmed that the flaperon was consistent with that of Boeing 777 although it is not known if it is from the missing jet.

The Transport Ministry said that MH370 investigators would only be able to inspect the flaperon after Monday because Malaysian authorities had to attend a meeting with the French Government before they could actually see the debris.

Deputy Transport Minister Datuk Abdul Aziz Kaprawi said he was informed that only Malaysia, France and plane manufacturer Boeing would jointly inspect the debris stored at Toulouse at this point, adding that he was unaware if other agencies are also involved.

A CNN report said the US National Transportation Safety Board would also take part, with a French source telling the channel that a preliminary report could come as early as this week.

Reunion Island is a French island with a population of about 800,000 located in the Indian Ocean, east of Madagascar.

Flight MH370 with 239 people on board disappeared en route from Kuala Lumpur to Beijing on March 8 last year. It is believed to have ended in the southern Indian Ocean.