At 86, still a marine biodiversity champion 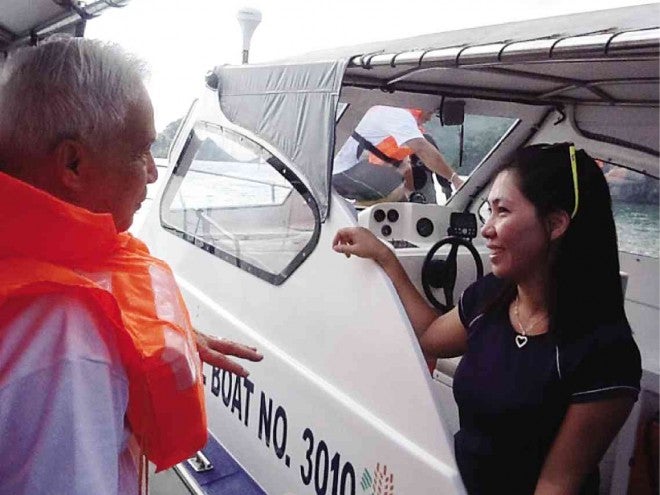 NATIONAL Scientist Dr. Angel C. Alcala (left) discusses with Vivien Facunla of Ecofish Project for fish monitoring at the marine protected area of Coron, Palawan province, during a site visit. The project in Coron seeks to rehabilitate the area. It is implemented by Ecofish and the Bureau of Fisheries and Aquatic Resources with help from the US Agency for International Development. CONTRIBUTED PHOTO

His silver hair and well-toned skin hardly reveals his age of 86 years. In fact, listening to him talk in his usually passionate and thickly accented manner, one may even imagine him to be a few decades younger.

Speaking about the sea and explaining the intricacies of the ecosystem beneath it is part of National Scientist Angel Alcala’s daily route of delivering his talks extemporaneously.

During a youth camp in Siaton town, Negros Oriental province, on April 28, he posed a challenge to the young audience: It’s now your turn to protect the environment.

“The results of our work have been known in various countries in the world and contributed to the Philippine status as a country with mega-biodiversity,” Alcala said during the Visayas SEA (Sea and Earth Advocates) Camp in Lake Balanan.

“It’s your time to mobilize the people to follow our example and continue our work,” he told about 30 young leaders, urging them to continue their work in conserving and expanding the protection of the rich marine biodiversity in the country.

The sea has been Alcala’s life. Growing up in a fishing village in Barangay Caliling, Cauayan town in Negros Occidental province, Alcala talks about the sea with as much passion as though his life depends on it.

He knows underwater life so well and the creatures know him.

While snorkeling with a former US ambassador and his wife on Apo Island several years ago, Alcala surprised his guests by pulling a poisonous banded sea snake by the tail and holding it in front of them. He then released the snake and it slithered away.

In the youth camp, Alcala stressed the need to protect the coral reefs, saying at least 30 percent of the marine resources should be declared marine reserves.

“Coral reefs are the equivalent of rain forests,” he stressed. “And if we continue to overfish, destroy coral reefs, time will come when the fishery component on which we depend will decrease and fishermen can no longer get any more fish.”

The Philippines is the third largest country in the world with the widest coral reef area. It has about 25,000 square kilometers of coral reefs, next to Indonesia which has 80,000 sq. km. and the Great Barrier Reef near Australia which has almost 350,000 sq. km.

But Alcala said only 4 to 5 percent of Philippine coral reefs were being protected. The rest are in varying stages of degradation due to overfishing, destructive fishing methods, pollution, and unsustainable tourism practices.

Alcala pioneered in research on and establishment of marine reserves or “no-take zones,” having started his work at Silliman University Marine Laboratory in the early 1970s.

In its simplest sense, a marine reserve is about protecting at least 20 percent of a coral reef area from all kinds of fishing and extraction to allow fish and other organisms to feed, breed and grow undisturbed. In time, they mature and migrate to the nearby unprotected areas, where people can harvest them, and produce larvae to sustain fishing areas.

Protection, Alcala said, should not be limited to coastal areas but should include also the offshore and the deep portions of coastal waters.

Alcala told the youth leaders how his experience as a child in Cauayan inspired him to help the environment.

“When you are confronted by this pristine environment, you cannot help but respect it, vow to study all forms of life in the environment and make important actions to allow them to survive and continue to give beauty to the people,” he said.

He returned to Silliman to continue his research, teaching and administrative work, and set up the Silliman University Marine Laboratory in 1974. He was appointed University President in 1991 but had to quit in 1993 after then President Fidel Ramos persuaded him to join his Cabinet as environment secretary.

After his government appointments (1992-1999), Alcala went back to Silliman anew to resume his scientific work. In June last year, he was named national scientist.

At the SEA Camp, Alcala urged the youngsters to never stop learning to acquire knowledge and open their minds to other people and other places, and learn from them.

“In order to maintain good work, you must study. Your study will tell you which of your results will be made available to the people,” he said.