Making a public appearance for the first time since being detained, the 91-year old senator also refused to comment about his plunder case in the Sandiganbayan over the alleged pork barrel scam.

It was a reunion of sorts for all the accused in the pork barrel scam case. Ruby Tuason, a former ally who turned against her friend Reyes and alleged boss Enrile, was also present as she was to testify against accused mastermind Janet Lim-Napoles for her bail hearing. Napoles was also present for the hearing.

Reyes and Enrile snubbed each other in the court room. Reyes sat on the far end, while Enrile at the front.

Meanwhile, Napoles skulked to the side of the courtroom hiding from the glare of the cameras outside.

Asked if he saw Reyes, Enrile said: “I didn’t see her. I have no eyes behind.” 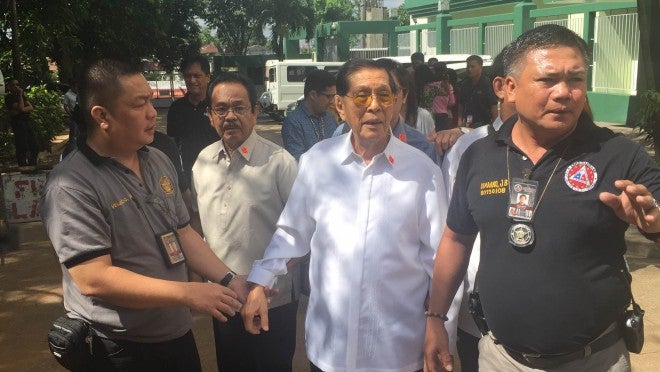 Socialite Tuason, who turned state witness, has identified her good friend Reyes as receiving the kickbacks for Enrile from accused mastermind Napoles.

During the pre-trial, both parties would prepare for the conduct of the trial proper, including the marking of exhibits, stipulation of facts, identification of issues, and identification of the number of dates each party needs for presentation of evidence.

The court cancelled Enrile’s pre-trial pending the termination of the preliminary conference.