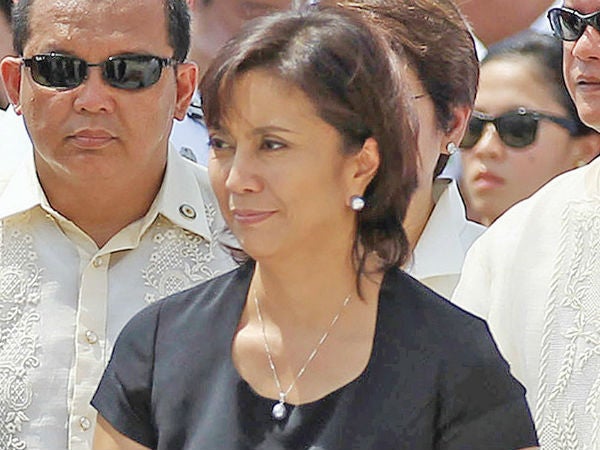 Camarines Sur Rep. Leni Robredo on Tuesday said she is not yet ready to run for vice president under Interior Secretary Mar Roxas.

In an interview, Robredo, the wife of the late Interior Secretary Jesse Robredo, said she still does not have the experience and popularity to run for the country’s second highest official of the country.

She said she was never approached to run with Roxas, who is now confirmed as President Benigno Aquino III’s anointed one as the Liberal Party’s (LP) presidential bet in 2016.

“It was never talked about. I only learned it from the media. Pero walang kumausap sa akin. Officially, walang discussions,” Robredo said of her rumored vice presidential bid.

Reached for a comment, Caloocan Rep. Edgar Erice, who is LP’s vice chair for political affairs, said “there are personalities recommending her (Leni).”

During the suffrage and electoral reforms committee hearing Tuesday, Robredo was teased by her colleagues that she is the country’s next vice president.

“Binibiro lang ako ng mga kasama. All of us, I think, learned it from the media,” Robredo said.

She said the reports that she is being eyed as Roxas’ vice president first floated from Senator Serge Osmeña who mentioned Robredo when asked who are the other potential running mates of Roxas if the talks with Senator Grace Poe break down.

President Benigno Aquino III met Poe and Senator Francis “Chiz” Escudero in a series of negotiations believed to be a bid to convince either one to run as Roxas’ vice president.

Poe has said she is more comfortable running with Escudero for a higher office. Poe and Escudero ran as guest candidates under the administration coalition Team PNoy in the 2013 midterm elections.

Robredo said she wanted to run for vice president once she gets more experience.

“I like Mar na maging presidente. But running with him, wala pa yun sa aking sphere. Para sa akin, it would be better to come more prepared,” Robredo said.

But she said she is seriously considering running for senator. Robredo is among the senatorial bets eyed under the Liberal Party.

“I’m actually thinking very seriously of running for senator. But I can’t decide now kasi maraming considerations. On one side, I have to prepare my district; on the other, the winnability. Mababa pa ako sa surveys,” Robredo said.

Robredo is the wife of Interior Secretary Jesse Robredo who died when the airplane he was riding on crashed in the waters off the shoreline of Masbate city on Aug. 2012.

Leni ran for the congressional seat in 2013 and won, whipping the Villafuerte political dynasty which ruled the third congressional district for over 40 years.