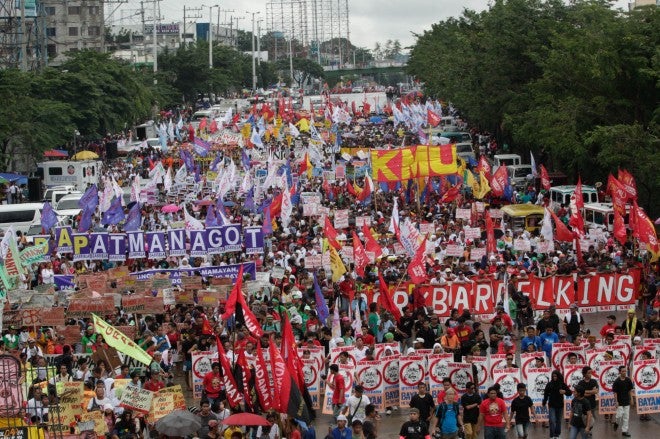 Militant groups march towards the Batasang Pambansa during the president’s State of the Nation Address. LEO SABANGAN II

To manage traffic during the State of the Nation Address (Sona) on Monday (July 27), Metropolitan Manila Development Authority (MMDA) has added 200 more traffic constables to the earlier 1,200 personnel they initially planned to deploy for the event.

MMDA Chair Francis Tolentino, during the agency’s weekly radio program, expressed fear that sudden thunderstorms in the afternoon could affect the event and cause traffic in other parts of the metro.

“We are anticipating heavy downpour on Monday, which could cause waist-deep floods in Sucat, Parañaque and also floodwaters coming from Marikina,” the MMDA chair added.

He also advised motorists on the rerouting plans along main roads near the Batasan Pambansa in Quezon City, where President Aquino will deliver his SONA.

A traffic advisory from the agency stated that the stretch of Commonwealth Avenue northbound from Ever Gotesco Street to St. Peter Church northbound will be closed to traffic starting midnight of Monday. On the southbound lane of Congressional Avenue from Jocfer Building to Commission on Audit, a zipper lane will be opened for northbound vehicles.

Tolentino said that all types of vehicles, except buses, taking these routes could use the following alternate roads:

* For those using North Avenue, use Mindanao Avenue, right to Quirino Highway then to destination.

MMDA Traffic Discipline head Cris Saruca added that they have assigned 1,400 personnel from the agency composed of members of the Traffic Discipline Office, Road Emergency Group, and Sidewalk Clearing Operations Group to manage vehicular and pedestrian traffic and support the police force in the area.

Concrete barriers will be placed along the northbound lane of Commonwealth Avenue early Monday, according to Saruca.

“We will implement our traffic management plan to ensure unimpeded travel of motorists as much as possible. Emergency personnel will likewise be on standby, including fire trucks and ambulances,” Tolentino noted.

The MMDA is the agency in charge of maintaining smooth traffic flow along Commonwealth Avenue and Batasan Road, which both lead to the Batasan Pambansa complex.

About 7,000 policemen will be detailed in the area to maintain peace and order and to provide security to about 3,000 guests who are expected to attend the event at Batasan on Monday afternoon.