MRT-3 after five years of the Aquino presidency | Inquirer News

MRT-3 after five years of the Aquino presidency 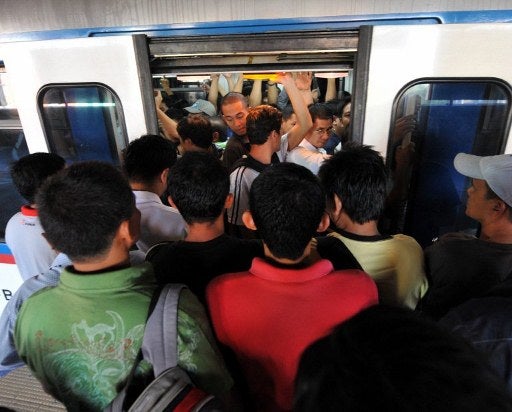 The sorry state of the country’s mass railway system, particularly the Metro Rail Transit (MRT-3), has been the showcase of the failed transportation reform under the Aquino administration.

During his past five State of the Nation Address (Sona), Aquino had little or no mention of his plans for the MRT-3.

In his 2013 Sona, Aquino mentioned the MRT-3 and the railway system but only to propose a fare hike. He said nothing about its rehabilitation or repair.

In January 2015, the fare increase at Metro Manila’s elevated train lines was implemented. Despite this, no improvement in service of the MRT-3 has been felt. Worse, technical problems persist.

In recent months, the MRT-3 has drawn sharp criticism from the riding public due to trains that often broke down and long queues at its stations.

Since the start of 2015, the MRT-3 reported at least 30 technical problems that paralyzed operations and stranded thousands of commuters.

In August 2014, at least 38 were hurt when a runaway MRT-3 train overshot the tracks at the Taft Avenue station in Pasay City.

The Department of Transportation and Communication (DOTC) has addressed the incident by telling its drivers to drive more slowly. Trains began running at 40 kilometers per hour instead of the usual 55 to 60 kph, making travel time much longer.

With slower trains, passengers have to endure longer waiting time and longer queues at the MRT-3’s 13 stations.

According to the DOTC, the MRT-3 ridership has swelled to about 600,000 commuters a day, far above its 300,000 projected daily capacity.

This has resulted in congested trains, which are stressed to beyond its operating limits and causing more frequent breakdowns and faster deterioration.

Currently, only 14 of the 24 MRT-3 trains are operational on a normal day. Some of the trains have undergone rehabilitation or have been deemed unsafe for travel.

In some instances, trains ran with their doors open, posing risks to the jam-packed passengers.

Other times, commuters were forced to walk the rails between stations after trains stalled midway.

MRT-3 General Manager Roman Buenafe said he was aware of the risks posed to commuters by the ageing trains, but he seemed limited to telling passengers to follow instructions inside the train, like always holding the hand rails.

Advocates of Science and Technology for the People, or Agham, said the MRT-3 was five times more dangerous compared to other trains in the world.

Agham said that since 2013, the MRT-3 had recorded 3.48 injuries for every 100 million passenger-miles compared to 0.7 injuries in American light rail.

Aside from being underfunded, the group said the “lack of proper maintenance” has made the MRT-3 “unstable.”

Knowing the dangers and inconvenience of taking the MRT-3, Transportation Secretary Joseph Emilio Abaya said taking the train was a “personal decision.”

“Riding is a personal decision. I won’t go out of my way to convince the people to ride. It’s every person’s decision. This is a free country,” said Abaya, who drew flak for his statement.

Science advocates said poor management was to blame for the worsening condition of the trains.

Recently, the Office of the Ombudsman ordered the filing of graft charges against former MRT-3 general manager Al Vitangcol over a $11.5 million anomalous maintenance contract for the MRT-3.

The Ombudsman, who has declared impartiality in it decisions, spared Abaya of any charges, drawing howls of protest from even its own investigators.

The case of Vitangcol stemmed from reports that he gave a P517-million contract to a relative.

In May 2014, Abaya ordered the replacement of Vitangcol. Light Rail Transit Authority (LRTA) administrator Honorito Chaneco was put as officer in charge.

Amid the fare increase in January 2015, the DOTC appointed engineer Roman Buenafe as MRT-3 manager.

Amid criticisms that the fare hike implemented by MRT-3 early 2015 did not result in improvements in train service, Buenafe said the fare hike was not an overnight solution.

“A fare hike is not a miracle solution,” he said, adding that it would take time for passengers to feel the benefits of the fare hike.
Improvements underway

The DOTC said improvements were underway for the beleaguered MRT-3.

DOTC said brand-new steel rails were delivered to the agency early July, which would be used to replace the line’s worn-out segments to ensure “safer and smoother rides” for its daily commuters.

The agency said the rehabilitation of the MRT-3’s escalators and elevators were also underway.

Earlier, “toilet rehabilitation” across the 13 train stations was started.

To augment capacity at the busy MRT-3, 48 new train coaches are expected to arrive in January 2016.

The prototype train cars are expected to arrive at the Port of Manila in the first week of August.

Abaya said the prototype would be assembled by the manufacturer which would start testing by September.

The new ticketing system, which would integrate fare collection in the three train systems, is also underway for the LRT lines 1 and 2 and the MRT-3,.

“This brings us closer to upgrading and modernizing the MRT-3,” said Abaya.
No option for now

For now, hundreds of thousands of commuters of the MRT-3 would have to continue enduring the long lines at its train stations and the train congestion as they wait for any reform to take place.

But will President Aquino mention concrete reforms for the MRT-3 and the country’s transportation system his last Sona on Monday?

Commuters can only hope for the best.