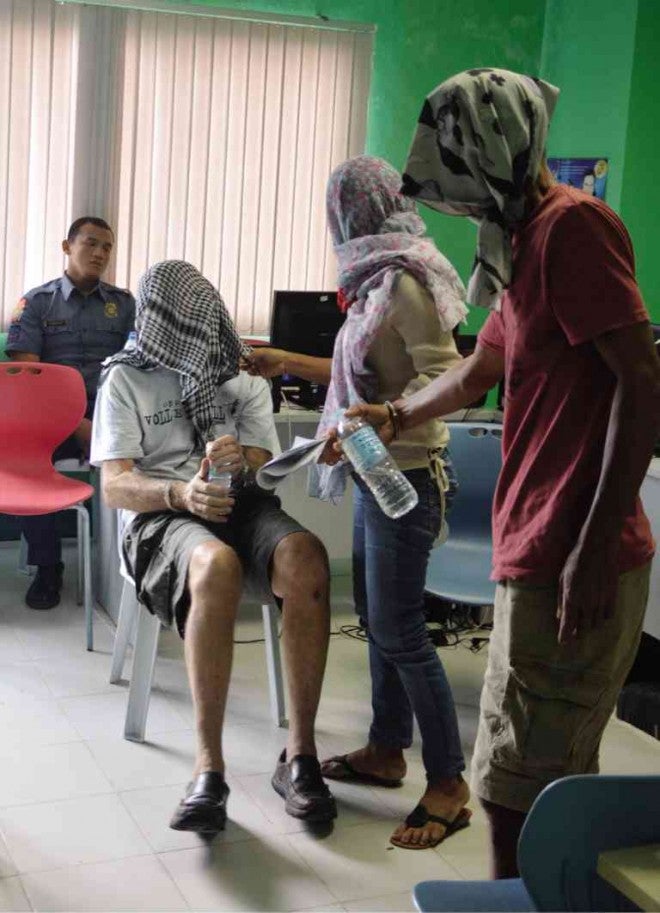 AN AMERICAN human trafficking suspect covers himself as his victims are presented to authorities in the office of the Cebu vice governor. The war on trafficking, however, should go beyond mere arrests, said Davao City Mayor Rodrigo Duterte. CHRISTIAN MANINGO/CEBU DAILY NEWS

DAVAO CITY—Mayor Rodrigo Duterte is pushing for the execution, through the death penalty, of human traffickers, saying their crime is as worse as destroying the lives of people through illegal drugs.

Duterte said while existing laws against human trafficking are “okay,” the death penalty should be carried out on traffickers to put emphasis on the gravity of the crime.

He said if he were the President, he would not hesitate to execute human traffickers and have the crime of human trafficking listed down as punishable by death.

A massive crackdown on human trafficking, he said, would be carried out if he were President. He said harshness is the only manner by which he would deal with human traffickers, who had taken victims hundreds of people, many of them children.

He said if he were to decide, he would offer all-out support for victims of trafficking and their families so they won’t hesitate to press charges against their predators.

Last year, lawyer Barbara Mae Flores, prosecutor in the Department of Justice in Southern Mindanao, said the low rate of conviction in human trafficking cases was the result of pressures such as being scared, fear of stigma, lack of financial means of the victims, and a tedious process to pursue a case against aggressors.

“Sometimes victims will just have to desist from filing a case,” Flores said.

For example, of 63 cases filed in Southern Mindanao since 2003, Flores said 11 had been dismissed because the victims were too scared to press charges. At least 12 other cases had been archived for lack of witnesses.

One good news, though, she said, is that 30 of the cases are still active in court, which means many victims were also willing to help prosecute human traffickers.

Rolando Lopez, a former agent of the US Federal Bureau of Investigation, said during an antitrafficking summit here last year that human trafficking is “as bad as drug trafficking.”

“The money that is made in illegal drugs is the same in human trafficking,” Lopez said.

Amy Muranko-Gahan, founding director of antihuman trafficking group Global Impact, said the number of people being trafficked was “massive” as there are 27 million people “living in some kind of slavery” worldwide today.

“It’s more than any time in history that we have slaves,” she said.

Exploitation takes place when predators take advantage of the weaknesses of vulnerable individuals for financial gain or turn them into some form of slave, Muranko-Gahan said.

In the Autonomous Region in Muslim Mindanao (ARMM), for example, armed conflicts and natural calamities, which trigger massive displacements, make the five-province region a lucrative ground for human traffickers, according to ARMM Executive Secretary Laisa Alamia.

“Traffickers become creative nowadays as they lure parents on promises of jobs and easy money for their children,” Alamia said.

He said in 2014 alone, there were 387 victim-survivors of human traffickers in Maguindanao, Sulu, Lanao del Sur, Basilan and Tawi-Tawi.

Duterte admitted that arrests were being made like that of four trafficking suspects, including a Malaysian, in Zamboanga City about two weeks ago.

Duterte was referring to the July 8 arrest reported by the Zamboanga City Police and the rescue of 32 women, 11 of them minors.

But to make the law more “biting,” he said offenders should be sent to the death chamber.

Duterte reiterated his belief that hardened criminals should not just be sent to prison.

“Let’s not allow them to commit more crime that would make life miserable for law-abiding citizens,” he said. Allan Nawal, Inquirer Mindanao