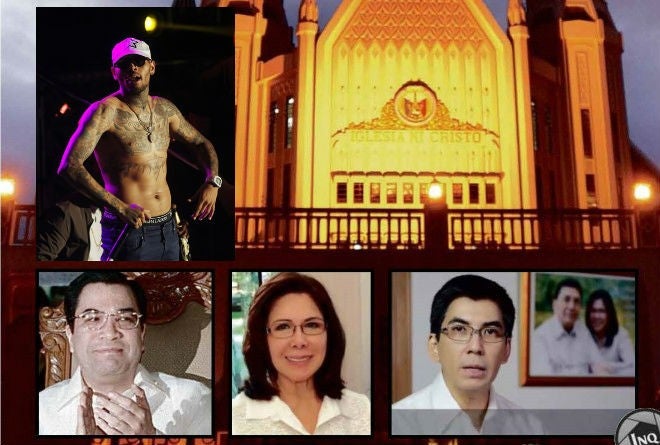 Iglesia ni Cristo, a politically influential and secretive Christian church involved in a legal dispute with American R&B singer Chris Brown, has been caught in a rising tide of its own troubles, including allegations of abductions and misuse of funds.

The Philippine government on Friday opened an investigation into allegations that the advisory Council of Iglesia ni Cristo or INC was responsible for abducting ministers critical of church leaders and financial abuse. The announcement by the Justice Department caps months of swirling rumors about corruption and internal feuds in the church, which has been controlled by the founder’s family for two generations.

Brown gave a concert in Manila this week but was delayed from leaving because of a fraud complaint filed by a corporation run by the church. It claims it had paid Brown and a promoter $1 million in advance for a New Year’s Eve concert at the 55,000-seat Philippine Arena, which he canceled without paying the money back. Brown was allowed to leave Manila late Friday after obtaining clearance.

READ: While promoter is jailed in PH, Chris Brown parties in Macau
The church’s troubles are apparently unrelated to its tiff with Brown, but could be far more damaging to its reputation by exposing the depth of internal squabbles in the 101-year-old movement. It is also likely to unmask the strong grip it has on its 2.3 million members.

The feud within the close-knit church became public this week when the mother and a brother of the group’s head, Eduardo Manalo, were expelled after they sought help from other members in a YouTube message, saying they were in danger and that several ministers had gone missing.

The brother, Felix Nathaniel Manalo, spoke out on Thursday against what he said were various anomalies in the church’s operations, saying funds “are being used up in all sorts of projects which we don’t even need.”

One of the projects, he said, was the Philippine Arena, claimed to be the world’s biggest indoor stadium where Brown was to have performed last New Year’s Eve and where the 100th anniversary of the movement was celebrated last year.

“We have been threatened by the Council … because they say we are opposing the leader,” he said. “We love our brother, but the problem is those around him.”

Another mysterious expense by the church, which was not mentioned by Felix Nathaniel, was its purchase of the US ghost town of Scenic, South Dakota, for less than $800,000, the same year that construction of the arena began. The church has not disclosed its plan for the abandoned town.

Isaias Samson, a minister and former editor-in-chief of the Iglesia newspaper, told reporters that he, his wife and son were held under “house arrest” by armed guards allegedly on orders of the church Council for a week before they escaped early Thursday.

“It is very difficult to talk about things that we know will damage the Iglesia because of the actions of some people,” he said, adding that about 10 ministers have been abducted.

With the controversy building up, the Justice Department announced it has opened an investigation.

The government cannot intervene in Iglesia’s squabbles but abductions are crimes that the National Bureau of Investigation will probe, Justice Secretary Leila de Lima told reporters.

The church believes that Jesus is the son of God, but it does not believe in the Holy Trinity as do Roman Catholics — the predominant religion in the Southeast Asian nation. Iglesia commands political influence because its members vote as a bloc in national elections, making them highly sought after by politicians, especially presidential aspirants.

The movement’s founder, Felix Manalo, broke away from the Catholic Church and is regarded by his followers as a prophet. He died in 1963, and was succeeded by his son, Erano Manalo, until his death in 2009, when another Manalo son took over as “executive minister.”

Bienvenido Santiago, Iglesia’s General Evangelist, denied allegations of abductions and said the church is “not a family corporation.”