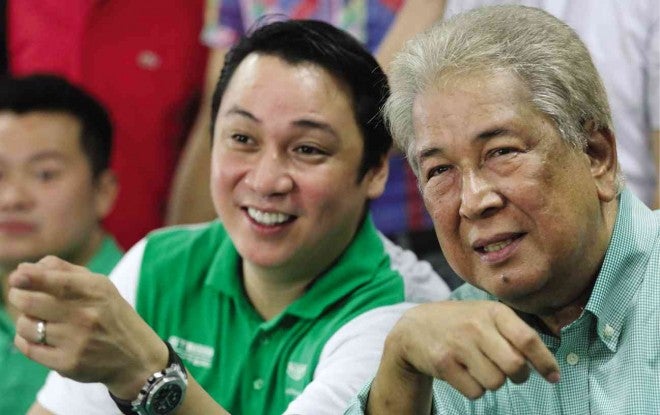 WARMING up the election fever in Manila, Rep. Amado Bagatsing has launched his bid to be the next mayor of the city once governed by his father, offering himself as an alternative while blaming the city’s “deterioration” on the incumbent Joseph Estrada and his predecessor, Alfredo Lim.

Gathering his supporters in Pandacan on Wednesday, Bagatsing announced his intention to run in the 2016 elections and loaded his speech with the complaints he had supposedly received from his constituents about Estrada and Lim’s programs.

“Enough is enough. The people of Manila—from tricycle drivers, market vendors, businessmen and even tourists—are complaining of the awful policies of the city government. The people have tried Mayor Lim and Mayor Erap, so let’s try Amado Bagatsing,” he said.

According the congressman, the city continued to deteriorate under Lim and Estrada’s administration, with the former plunging the city into debt and the latter “monetizing” government services that are supposed to be free of charge.

“The former mayor, who served for nearly 12 years, let Manila fade into darkness and filth while also taking out so many loans for the city,” he said, referring to Lim.

“Under this current administration led by an actor, people here have become poorer. The city government has sold so many government properties and has made money out of everything. I fear that I might wake up one day learning that the entire city has been sold, including City Hall itself,” Bagatsing added, assailing Estrada’s actions.

He also found fault in the local traffic management office’s towing and clamping operations against illegally parked vehicles, saying they had become “indiscriminate and abusive.”

He also assailed the increase in real property and business taxes under Estrada’s watch, as well as his administration’s joint venture agreements and private-public sector partnerships (PPPs).

He cited as an example the Quiapo underpass which “has been sold so it could be turned into a mall” yet was closed during the Black Nazarene feast for security reasons, thus inconveniencing the public.

Bagatsing also criticized the “privatization” of the city’s public markets, which he said would displace smalltime vendors by the thousands.

“There was no due process for this project. The stall holders weren’t told about the plan and now they fear being evicted any day. Something’s fishy about this and other deals. If the city government claims to have P10 billion in the bank, why does it still go into joint ventures?” Bagatsing said.

Through public information chief Diego Cagahastian, the Estrada camp disputed Bagatsing’s view that the local public markets were being privatized.

“There is no privatization of Quinta or any market. These are joint ventures with investors and the administration of the markets is retained by the city. Investors put in money to rehabilitate or modernize the markets,” Cagahastian said.

The lawmaker let out his tirades against Estrada a week after the latter’s administration topped the 2015 Cities and Municipalities Competitiveness Index, which evaluates local governments based on data reflecting their economic dynamism, infrastructure and public services, among others.

Now on his third and final term in the House of the Representatives, the congressman is the son of the longest-serving Manila mayor, the late Ramon Bagatsing, who held the post from 1972 to 1986.

In media interviews in April, Estrada said he would be seeking reelection next year. Lim, meanwhile, is also rumored to be planning a return to City Hall.