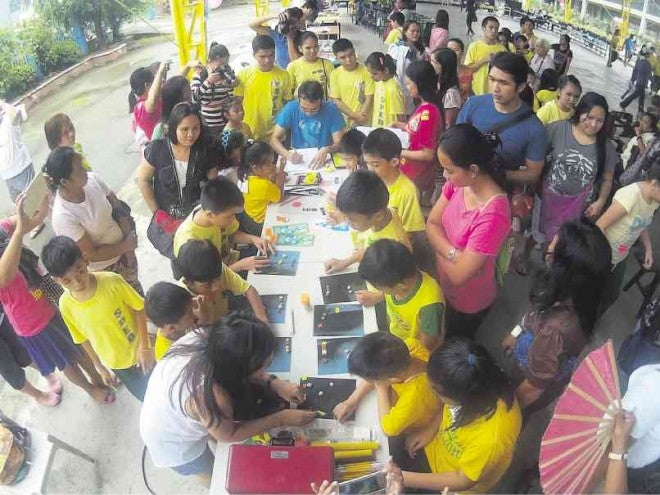 DESPITE the holiday, 75 children with special needs went to school to see what they can learn from art and sports activities mounted by the nongovernment Differently Special Achievers Movement.

The activities on July 17 kicked off the Movement’s mentorship program in a school where hundreds of students are children with special needs—San Jose SPED Elementary School in Barangay San Jose, Rodriguez, Rizal.

Together with Natimars Foundation, a charitable institution that focuses on education and the arts, Differently Special conducted activities that divided the SPED students into 18 different groups, depending on their interests.

“We provide free programs that allow persons with disability [PWDs] to develop their skills and talent,” Karen Navarro, one of the cofounders of Special Achievers, said.

“The focus is to help PWDs with limited resources to receive free training and coaching in the areas of arts and sports from people excelling in those areas,” Navarro said.

The goal of the program is for the children to be “special achievers” in whatever field they choose, Navarro explained. She said the idea started when her group met 18-year-old Jenelyn Lipon, who despite her hearing impairment, has been joining art competitions since five years ago. Lipon is one of the 11 artists featured in the Differently Special’s #CalendarForACause project with Prosel Pharmaceutical Inc. and Brahma Kumaris.

“We saw her potential and so we decided to take her in as our scholar. We want to pilot test our program for a year in a public school before offering it to other schools,” Navarro said.

“With the (special needs children), because they are art-inclined, you know that once you give them art materials, you can engage them,” Parma, who is a part of Natimars Foundation, said. “What’s important here is the connection. When they feel that you’re connecting with them in the level that you want them to grow and develop, you are able to reach them and teach them.”

She adds: “You have to discover these children’s interests. It doesn’t matter if they are different, as long as they have the talent and are able to develop it.”

Navarro said with Special Achievers’ past programs, they saw the potential that children with autism have when it comes to visual arts.

“We have observed that PWDs use art to express themselves. Most of our visual artists have autism. Those with autism have difficulties in verbal communication and social interaction but they have very good visual perceptual skills,” she said.

Navarro cited Lipon as an example, where the teenager was able to communicate by drawing, regardless of her hearing impairment.

“Though they can’t communicate very well verbally, they express their feelings by drawing or painting it,” Navarro said.

“Often we call them ‘special’ because they have special needs compared to their neurotypical peers … [but] they need special attention at home, the school, and the community,” Navarro said. “As the line painted on the wall of the classroom in San Jose says it, ‘A special needs child is the light that helps others see.’”

Navarro said the mentorship program with San Jose SPED Elementary School would continue and would be held once a month. They are reaching out to companies and organizations for partnerships to increase the program to once a week.