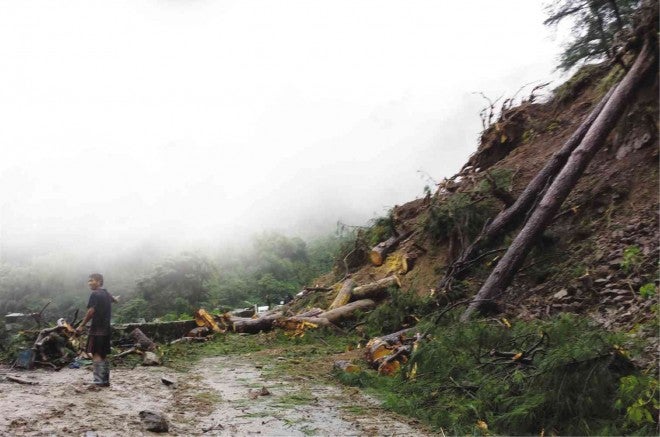 THE BAGUIO CITY council is trying to determine if anyone should be held liable for the landslide that killed two people on July 13 on Kennon Road because it occurred near a government project site. EV ESPIRITU/INQUIRER NORTHERN LUZON

BAGUIO CITY—The city council on Monday asked officials of the Department of Public Works and Highways (DPWH) here to determine if the agency’s contractor was at fault for the Kennon Road landslide that killed two women on July 13.

Councilors Elaine Sembrano and Betty Lourdes Tabanda pressed the contractor, 3K Rock Engineering, to explain why the landslide occurred. The council earlier noted that a retaining wall was being built near the accident site near the boundary of Baguio and Tuba, Benguet.

But a report from the DPWH has cleared 3K Rock Engineering of liabilities.

Government geologists would inspect the area next week to examine the extent of the damage, said Fay Apil, Cordillera director of the Mines and Geosciences Bureau (MGB).

Carabbacan said the DPWH redesigned the retaining wall to strengthen sections of the mountain that eroded along the more than 100-year-old zigzag road.

“To protect travelers, our people braved the rains to cut down trees to ease pressure on the mountain,” he said.

“What took place was an accident,” said former Councilor Rocky Balisong, the lawyer of 3K Rock, during the council session.

The DPWH report, which described the event as “force majeure” (superior force or an act of God), was also read to the council during its July 20 session.

The contractor, represented by Francis Cuyob and Balisong, was invited to the session to update the councilors about the extent of repairs on Kennon Road. Jessica Tabilin with a report from Vincent Cabreza, Inquirer Northern Luzon