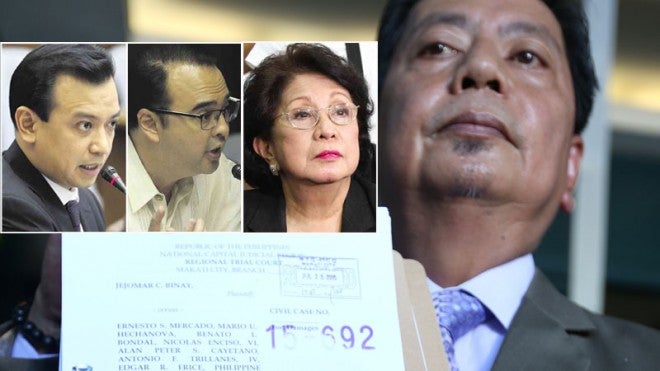 In a 41-page complaint-affidavit filed in the Makati Regional Trial Court (RTC), Binay accused the 13 of “orchestrated persecution” to “malign and discredit” the Vice President in the 2016 elections in bringing up charges of graft, corruption and other illegal activities to amass ill-gotten wealth when he was still mayor of Makati City.

Binay asked the respondents for P100 million in moral damages and another P100 million in exemplary damages. In addition, Binay also demanded from the defendants P1 million for lawyer’s fees and litigation expenses.

Claro Certeza, Binay’s lawyer, who filed the complaint in the City Prosecutor’s Office, said the Vice President had long considered filing the complaint but earlier thought that he did not want to create disorder but noted that Binay could not anymore take the baseless accusations against him.

“This damage suit will allow the Vice President to prove what he has been saying all long—that the charges made against him are solely intended to malign his character and destroy his chances of being elected President,” Certeza said.

Trillanes initiated the Senate blue ribbon subcommittee inquiry in November, accusing the Vice President of illegally enriching himself while he was mayor of Makati City.

“Before the courts, both the [Vice President] and his detractors will be given equal chances to prove all their claims where strict rules on evidence are applied in search for the truth,” Certeza noted.

Binay and his son, Makati Mayor Jejomar Erwin Binay, have both been charged with graft and corruption over allegations of overpricing of both the Makati City Hall Building II and the Makati Science High School building.

The younger Binay is now on a six-month preventive suspension while the Ombudsman is conducting an investigation of the charges against him.

The Binays have denied wrongdoing.

The complaint said that Cayetano, Trillanes and Erice were the designated “attack dogs” against him.

Binay accused Mercado, Hechanova, Bondal and Nicolas Enciso of being “paid witnesses” during the Senate inquiry on the alleged irregular transactions during his term as Makati mayor, including the controversial cake-gifting program for senior citizens.

Tetangco, Abad, Emmanuel Dooc and Teresita Herbosa, he said, were behind the AMLC decision approved by the Court of Appeals to freeze Binay’s bank accounts totaling P600 million, suspecting the money was tainted with corruption.

The Inquirer, also named a respondent in Binay’s complaint for allegedly publishing defamatory news and frequent screaming headlines against the Vice President, published the contents of the AMLC report, which revealed, among others, that the deposits of Binay and his dummies reached P11 billion.

Bondal, who happened to be at Makati City Hall for a case hearing, claimed that he and the other named respondents in the case had the freedom to express themselves.

He welcomed the filing of the case, saying he would carry “a badge of honor” because of this.