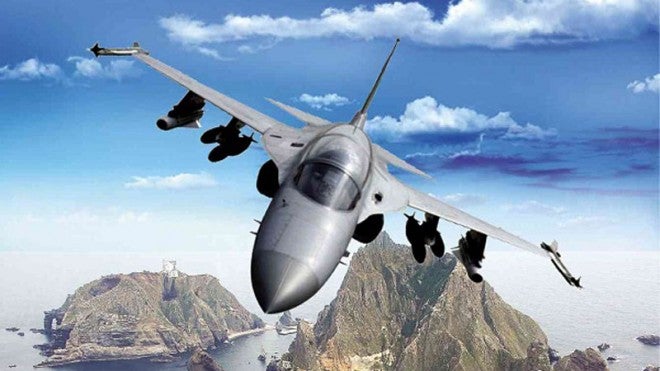 This is the kind of fighter jet—called the FA-50—the Philippines acquires from South Korea. This combat aircraft can carry an array of weaponry, such as air-to-air and air-to-surface missiles, and precision-guided bombers, and is equipped with a night vision imaging system. PHOTO FROM WWW.KOREAAERO.COM

The Philippines plans to station fighter jets and frigates on a former US naval base facing the South China Sea, where it is engaged in a maritime row with China, a defense official said Monday.

They will be located in Subic Bay, some 200 kilometers from a shoal off the northern Philippines controlled by Chinese forces, said Arsenio Andolong, the defense department’s public affairs chief.

The Armed Forces of the Philippines “will use portions of Subic for the new assets coming in like the FA-50 (jets) and the new vessels that are arriving,” Andolong told AFP.

“They (the Subic facilities) are ideal: it has a deep-water port, the runways are perfect for the FA-50,” he added.

Manila said last week it would reopen Subic Bay–one of the US’s largest overseas bases until it was shut down more than two decades ago–and station Filipino military assets there for the first time.

Andolong said the military has leased part of Subic Bay for 15 years and plans to use it as a base for new equipment that will be bought over the next few years as part of a modernization program.

The first pair of a dozen FA-50 fighter jets is scheduled to be delivered this year and the other 10 will arrive within two years, he added. The military is still evaluating from where to acquire two new frigates.

Subic Bay currently serves as a commercial port and tourist site facing onto the South China Sea where China is locked in a dispute with the Philippines as well as Brunei, Malaysia, Vietnam and Taiwan over conflicting territorial claims.

Andolong said the South China Sea dispute was “one of the considerations that were envisioned when the (lease agreement) was signed.”

He also said the “proximity” to Scarborough Shoal–a rich fishing ground that was occupied by Chinese ships after a standoff with the Philippines in 2012–was another.

The Philippines has been building up its weak military and improving defense ties with close ally the US as its territorial dispute with China has increased.

Andolong said US ships could continue to make port calls and hold military exercises there as they have been doing in recent years, but brushed aside speculation Subic would become a US base again.

Last year, Manila signed an agreement giving the United States more access to Filipino military facilities, but the deal has been postponed because of a legal challenge now being heard by the Supreme Court.

Subic to be military base again

AFP to start construction of new naval base in Subic, says mayor