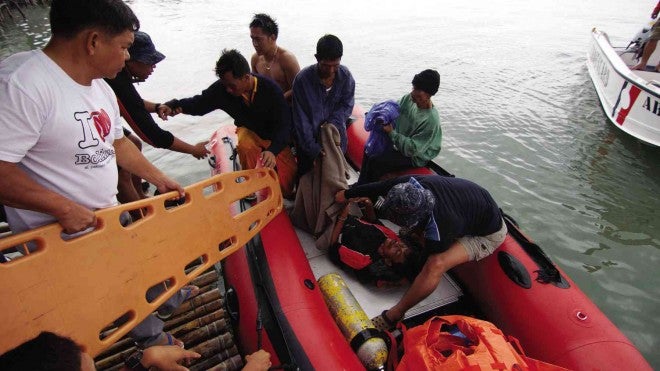 Coast Guard personnel attend to one of the fishermen rescued in the West Philippine Sea as they arrive in Sual, Pangasinan province in the first week of July. Another group of fishermen from Infanta, in the same province, have been reported missing. BUDANG NISPEROS / INQUIRER NORTHERN LUZON

DAGUPAN CITY – Eleven fishermen from Infanta, Pangasinan, have been missing since Saturday, a village official said Monday.
Charlito Maniago, village chief of Cato in Infanta, said the fishermen left the village on July 15, as the southwest monsoon dumped heavy rain on Northern Luzon and whipped huge waves in the West Philippine Sea.
“Our last contact with them was at about 2 p.m. on Saturday, just before their boat sank,” said Maniago by telephone.
He said the fishermen told him that their boat was being battered by huge waves some 80 miles west of Bolinao town.
“They must still be floating out there. They said they tied themselves to a payao (artificial reef),” Maniago said.
He said he had been stopping fishermen from sailing during bad weather. But some fishermen insist on going out to sea because they did not have any alternative livelihood.
“We were able to contact two other fishing boats and asked them to help the distressed fishermen. But the rough seas prevented them from leaving the payao where they were anchored,” Maniago said.
Lt. Senior Grade Alexander Corpuz, commander of the Coast Guard station in Sual town, said he was informed on Monday that a United States Navy ship had picked up a group of fishermen but they were verifying if these were the missing fishermen from Infanta.
“We have already emailed them the names of the missing fishermen for verification. We are just waiting for their response,” Corpuz said.