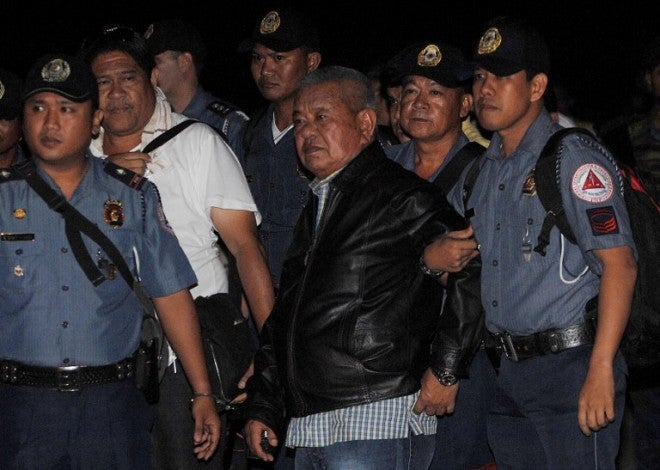 In this photo taken on April 16, 2010 former Governor of the Philippine province of Maguindanao Andal Ampatuan Senior (C) and four members of the Ampatuan clan are escorted by policemen as they arrive at the Villamor Airbase in Manila. AFP FILE PHOTO

AWANG, Maguindanao—“He was powerful and moneyed. But in the end, the dead Muslim only has a piece of white cloth to bring with him or her to the grave,” a Muslim religious teacher commented.

But it was a funeral procession whose length and breadth was last seen here 30 years ago, according to mourners and sympathizers.

The cortege that brought Andal Ampatuan Sr., the former Maguindanao governor, from the airport to his final resting place in Shariff Aguak was similar to the seemingly endless convoy of vehicles during the interment of Salipada Pendatun, a former senator, in 1975, said a former Maguindanao congressman, Didagen Dilangalen, and Datu Piang Mayor Genuine Kamaong.

People had been flocking to the Ampatuan mansion in Shariff Aguak since it was announced by the family’s lawyer that Ampatuan Sr., the main suspect on trial for the 2009 mass murder of a rival political family and journalists, died late Friday at the National Kidney and Transplant Institute (NKTI) where he was comatose after suffering a heart attack.

In accordance with Islamic law that the dead should be buried before sunset, Andal Sr., 74, was buried at 2:45 p.m. on Saturday, said a nephew, Rajah Buayan Mayor Zamzamin Ampatuan.

According to another relative, the body had been bathed and anointed in Manila in accordance with Muslim rites, and was ready for burial upon arrival at the Awang Airport in Datu Odin Sinsuat at 11:30 a.m. Saturday. The body was immediately carried from the plane to an SUV owned by Ampatuan Sr.

Relatives and political allies led the convoy of 15 vehicles that brought the body to Shariff Aguak 49 kilometers away. Inside the mansion, the body was placed on a bed draped on all sides by a green fabric. Here, close family members, relatives, political allies and supporters were allowed to pay their last respects.

Final prayers and rites were performed by mostly male relatives in a private family mosque that Ampatuan Sr. had built inside the mansion’s compound, following which Ampatuan Sr. was buried in a family plot near the mosque beside his son, Saudi, the Datu Piang mayor who was killed in a bomb explosion in 2002.

They had wanted the burial to be as private as possible, said son-in-law Hadji Yakub Ampatuan. But by noontime on Saturday, close to a thousand people had gathered outside the compound to meet the funeral cortege.

Hundreds of people managed to squeeze into the mansion’s compound to pay their last respects to Maguindanao’s de facto ruler for many years and join the grieving family, he said.

Dr. Abubakar Datumanong, an Autonomous Region in Muslim Mindanao (ARMM) official, said the death of Ampatuan Sr. may have come as a surprise to those who believe that “he who lives by the gun shall die by the gun.”

He noted that Ampatuan Sr.’s death came almost on a Ramadan fasting day, which every Muslim could only wish for as an appointed time of death. Muslims believe even mortal sins are deemed forgiven for one who dies during Ramadan.

Extending the condolences of the Lucman and Alonto families of Lanao, Norodin Alonto Lucman, the eldest son of the late Lanao Congressman Al-Rashid Lucman, said: “The last time I saw him (Ampatuan Sr.) was in Shariff Aguak years ago, when he gleefully recounted to me his fondness of Bapa (Rashid Lucman) and Gen. Salipada Pendatun, two Muslim leaders whom he idolized and respected.”

Former Assemblyman Datu Pike Mentang said Ampatuan set an unprecedented record in ARMM politics, having such a strong influence over Muslim leaders that he was able to gather them into meetings at his house literally with “a click of his fingertips.”

The younger Lucman added: “Wealth and power could be intoxicating.”

At a time when his elders dominated local politics, Ampatuan Sr. had been a policeman, a councilor or in the municipal payroll as “confidential aide” to local executives of Maganoy (now Shariff Aguak) town. He was a councilor in February 1986 when the dictator Ferdinand Marcos was overthrown in the First Edsa People Power Revolution.

Eyeing the top local post, Ampatuan Sr. allied with the more politically influential Matalam and Pendatun families in a bid to get to then Interior Secretary Aquilino Pimentel Jr., who approved the appointments of officers in charge (OIC) of local posts.

Appointed mayor in 1986, Ampatuan Sr. was undefeated in three consecutive local elections in 1988, 1992 and 1995. In 1998, he set his sights for the gubernatorial post, but the Lakas-NUCD favored then incumbent Maguindanao Gov. Zacaria Candao.

In the 2004 presidential race, he threw his full support behind President Gloria Macapagal-Arroyo, who dominated the polls in most of Maguindanao. That started his close alliance with Arroyo, especially when he managed to deliver a victory for Arroyo despite actor Fernando Poe Jr.’s popularity among Maguindanaons.

In the 2007 midterm elections, Ampatuan Sr. again proved he was a political figure to contend with when he delivered a 12-0 win for the administration’s Team Unity senatorial slate.

But while many have kind words to say, Ampatuan Sr.’s story will inevitably be judged by his alleged participation in the 2009 Maguindanao massacre. Ampatuan Sr., his three sons, a sibling and followers, including police officers have been on trial from 2010 for the Maguindanao massacre, the worst political killing in the country.

He and his relatives were accused of killing 58 people, including the family of their political rival and 32 journalists, on Nov. 23, 2009. It was also the world’s worst single killing of media workers.

At a roadblock, the gunmen stopped the cars carrying the wife and three sisters of Esmael Mangudadatu, the contender in elections for provincial governor, and local journalists who were accompanying them on their way to file candidacy papers.

They brought them to a hill where some were ordered to line up and were mowed down at close range, according to authorities. Others were shot inside their vehicles and buried in huge holes that had been dug by a backhoe. Bullet-riddled bodies were also found scattered on the ground or in other vehicles.

Andal Ampatuan Sr. and his namesake son and the other accused have denied the charges against them. The slow pace of the trial has been criticized by the victims’ families. President Benigno Aquino III has repeatedly promised to deliver justice but without compromising the judicial process by rushing through the proceedings.

The Ampatuan family appealed for respect as they grieve over the death of the former governor, lawyer Salvador Panelo said.

Andal Sr. was transferred from detention to the NKTI on June 5 for treatment of his end-stage liver cancer. He slipped into coma last Monday following a heart attack. He died at 10:02 p.m. last Friday from liver failure, the lawyer said.

After following prison protocol, jail officers turned over Andal Sr.’s remains to the family. The body was flown in a Philippine Airlines flight to Cotabato. With Erika Sauler in Manila, and Edwin Fernandez, Inquirer Mindanao

Ampatuan kin emotional as they paid last respects to pa–lawyer