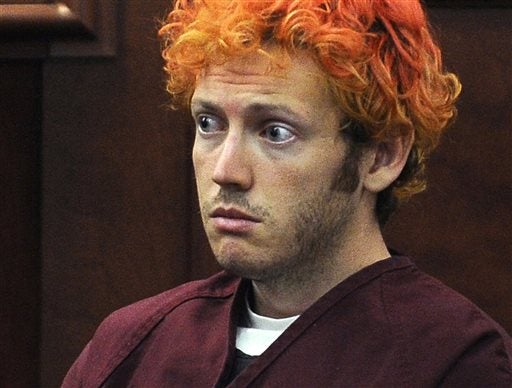 In this July 23, 2012 file photo, James Holmes, who is charged with killing 12 moviegoers and wounding 70 more in a shooting spree in a crowded theatre in 2012, sits in Arapahoe County District Court in Centennial, Colo. On Thursday, July 16, 2015, a jury found Holmes guilty of murder in the methodically planned attack. The verdict means the 27-year-old former neuroscience graduate student could get the death penalty for the shooting. (RJ Sangosti/The Denver Post via AP, Pool, File)

Judge Carlos Samour read out guilty verdicts relating to each of the 12 people killed when Holmes opened fire at a packed midnight screening of “The Dark Knight Rises” in the town of Aurora, just outside Denver.

The 27-year-old Holmes, dressed in a blue shirt and cream-colored trousers with his hands in his pockets, showed no emotion as the verdicts were read out.

The trial will now move on to the sentencing phase, in which Holmes — who had pleaded not guilty by reason of insanity — could face the death penalty.

The jury foreman handed over a thick stack of verdict forms, representing the scale of the atrocity: in all, Holmes faced 164 charges of murder and attempted murder, as well as one count of possession of explosives.

After the 12 murder verdicts, the judge spent several minutes reading out guilty verdicts on the attempted murder charges for those injured.

Jurors were relatively quick to reach their verdicts: they only retired to deliberate Wednesday on whether Holmes — who has been in custody since he was arrested outside the theater — was sane when he opened fire.

Wrapping up the trial on Tuesday, prosecutor George Brauchler ran through a blow-by-blow account of the massacre, which stunned America and reignited the country’s perennial debate about gun control.

Referring to the 400 people in the theater, he said: “They came in hoping to see a story of a hero dressed in black, someone who would fight insurmountable odds in the name of justice and trying to protect others.

“Instead a different figure appeared by the screen dressed all in black. And he came there with one thing in his heart and in his mind — and that was mass murder,” the prosecutor said.

But Holmes’ defense lawyer Dan King insisted his client was insane, saying: “The fact of the matter is that when Mr. Holmes stepped into that theater… he had lost touch with reality.

Brauchler, however, urged the court to “reject this claim that he didn’t know right from wrong… That guy was sane beyond a reasonable doubt, and he needs to be held accountable for what he did.”

It appears jurors did not buy the defense team’s arguments.

The 49-day-long trial included weeks of grisly evidence and testimony from more than 250 witnesses.

The jury also was shown hours of videotaped interviews of Holmes by psychiatrists for the state.

Both they and two defense psychiatrists agreed the defendant struggled with mental illness. The state’s psychiatrists however maintained that Holmes was sane when he carried out the rampage.

The punishment phase of the trial could last the rest of the summer, Samour has said.

The prosecutor has said he will seek the death penalty.

If Holmes had been found not guilty by reason of insanity, he would have been confined to a state mental hospital.

To win a release, he would have had to be found free of mental illness and no longer a danger to himself or to others.