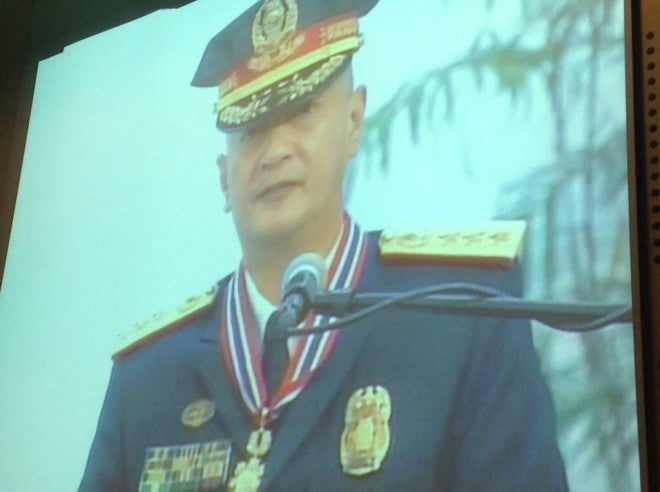 EVEN on his last day as a police officer, retired Deputy Director General Leonardo Espina was still emotional.

Etched in the minds of many was Espina, like a father who lost his sons, tearing up on national television seeking justice for the 44 slain troopers of the Special Action Force in Mamasapano, Maguindanao. Until his last speech before police officials and people closest to him, Espina was in tears.

On Thursday, Espina relinquished his post as officer in charge of the PNP and retired as a policeman after 38 years of service.

“Today I end my more than 38 years of military and police career, I now stand before you, humbly submitting that I have lived the most fulfilling life in the service – serving God, country and people,” said Espina in a speech he delivered during his retirement honors in Camp Crame.

Espina first thanked President Benigno Aquino III for trusting him that he could lead 160,000 policemen at a time the PNP was in its most difficult time. He also thanked the President for his “exceptional concern for the development of the PNP” and for continuously boosting the morale of policemen.

Espina was awarded by Aquino the Presidential Legion of Honor– the highest honor the President can bestow on a public servant.

He then thanked Interior Secretary Manuel “Mar” Roxas II, whom he described as “indefatigable,” for finding time to attend his testimonial parade at the Philippine Military Academy in Baguio City last June.

“Despite the late notice and despite you being under the weather, it shows your great and genuine concern for your men. You stood there on the sidelines just to congratulate me and my family and friends and even played the role as our official photographer,” said Espina.

He also expressed gratitude to all officials, from the most senior down to the non-commissioned officers in the PNP for being with him in the fight against crime.

Espina started to turn emotional when he asked his wife, Maria Dinna, and his three sons, to stand to be recognized.

“My pure heart partner whom I don’t have to live life without, our sons, please also rise, I say: Papa’s going back home. Please forgive me for being not there for you all the time as you were growing up, I know you tried hard to understand Papa’s work, though you could never really fully understand. As I vowed I’d spend the rest of my life seeing you through well, and make up for lost precious time to the best I could. Thank you,” said Espina.

Espina, who had served as spokesperson of the PNP in 2002 and 2009, emotionally thanked the members of the media.

“To my bosom buddies in media up there, it’s time for me to say goodbye… It truly pains me just thinking I will not be seeing you anymore,” he said, his voice cracking.

“To the incoming chief PNP, Dir. Gen. Ric Marquez, all our blessings go your way as you lead this institution. We are all very sure that you will do very well as you always do,” he said.

He said Marquez was one of the most hardworking people he has ever known in his life.

“You have shown your mettle in leading our men, in planning out and supervising the major tasks we have faced which all turned out to be very and highly successful. Continue leading our men in our fight against crime, in protecting our people, the PNP is in very good hands,” he said.

The outgoing OIC then urged all members of the PNP to rally behind their new leader unequivocally.

“I urge all the more than 150,000 members of the PNP to place all your support to the new chief PNP, rally behind him and unequivocally ensure peace and the protection of our people, and our continuing fight against the menace of crime and in service.”

His last words: “Ladies and gentlemen, my friends, I now sign off. I will miss you all dearly, and good bye all. Thank you. Salamat.”