Poe, Escudero: No more 3 for the road; Roxas silent 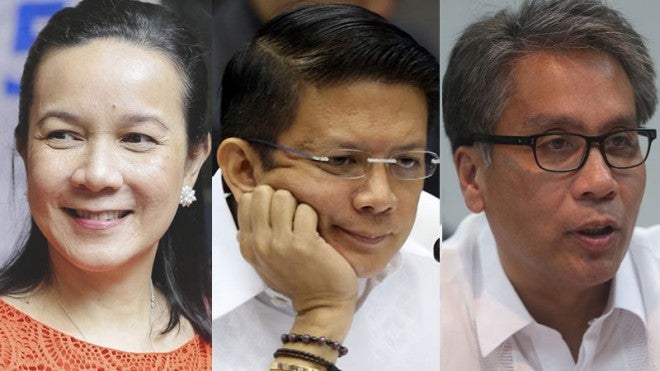 Sen. Grace Poe on Sunday clarified in a phone interview with the Inquirer that there were no “new proposals” or “concrete plans” for her to join Interior Secretary Mar Roxas on a tour of the provinces.

READ: Aquino to Poe: ‘Go around the country with Mar Roxas’

Poe said President Aquino invited her to join Roxas on a tour way back in May, but the idea was not discussed during their meeting in Malacañang on Thursday.

“There has been no concrete agreement and planning since then. I think it is safe to say that it will not push through,” she said.

Poe told the Inquirer on the phone on Saturday that Mr. Aquino had asked her to go around the country with Roxas and that she had said yes.

But she said she asked Mr. Aquino to allow Sen. Chiz Escudero to join the tour and the President agreed.

She did not say when Mr. Aquino asked her to go around the country with Roxas, but a source told the Inquirer it was before the meeting among the President, Poe and Escudero in Malacañang on Thursday.

No word from Aquino

Escudero on Sunday said it was possible President Aquino or Roxas was no longer considering the tour.

In a text message to the Inquirer, Escudero said Mr. Aquino did not mention the tour to him during their meeting in the Palace on Thursday.

He said Poe had mentioned it to him, but she did not ask him to go. Neither did the President.

Asked whether he would join the tour, Escudero said: “Given that no such request was made other than a mere mention of the conversation between the President and Senator Grace, there is nothing really for me to say yes or no to.”

Escudero said he was not and did not want to be presumptuous.

“Besides, the President didn’t say anything about that when we met so it might not even be a consideration for him or for Secretary Roxas anymore,” Escudero said.

The report about Poe joining Roxas on a national tour—even with Escudero as “chaperon”—caused excitement in the ruling Liberal Party on Sunday.

Roxas is the party’s presumptive presidential candidate in next year’s elections, and it is believed that President Aquino, titular head of the party, is trying to convince Poe, the new front-runner in the presidential polls, to run as Roxas’ Vice President.

But Roxas is unpopular with voters, placing third in the polls, behind Vice President Jejomar Binay and Poe, or even fourth—behind Rodrigo Duterte, the tough-talking mayor of Davao City.

It could be the thinking in the administration that Roxas’ unacceptability to voters may be eased if he is seen around with the highly popular Poe, whose independence and fearless stance in legislative inquiries involving President Aquino’s allies have catapulted her to the front line in the 2016 race for Malacañang.

Poe, however, has not decided whether to run for higher office. And she has said that if she will run, she prefers to team up with Escudero because she is “more comfortable” with him.