Aquino to Poe: ‘Go around the country with Mar Roxas’ 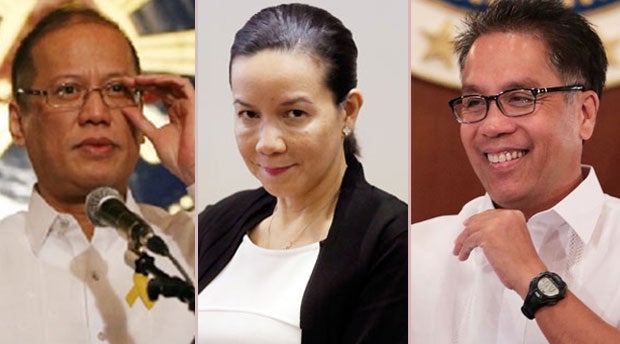 President Benigno Aquino III asked Sen. Grace Poe to go around the country with Interior Secretary Mar Roxas. She agreed, the Inquirer learned on Saturday, on one condition.

Poe requested the President to allow Sen. Francis “Chiz” Escudero to come, too.

Poe confirmed the information to the Inquirer on Saturday.

“The President asked that I go around with Mar. I said yes but three of us would go, including Chiz. The President said yes,” Poe told the Inquirer in a telephone interview.

She did not say when Mr. Aquino asked her to tour the country with Roxas, but the Inquirer’s source said it was before the meeting among Poe, Escudero and the President in Malacañang on Thursday.

“[Senator] Poe has always been saying she’s more comfortable with [Senator] Escudero [as a running mate] because of their long history,” the source, who requested not to be identified, said.

President Aquino is believed to be trying to get Poe to agree to run as Roxas’ Vice President in next year’s presidential election.

But Poe, the new front-runner in the presidential race, has not decided whether to run for higher office.

She has consistently said, however, that if she is running, she prefers to run with Escudero because she is “more comfortable” with him.

Poe has said she has nothing against Roxas, as it was he who brought her into the administration coalition in 2013, when she topped the senatorial election.

“Secretary Mar is a nice person. It was he who convinced me to run for the Senate and helped me,” Poe said.

Roxas is the presumptive presidential candidate of the ruling Liberal Party, but he is unpopular with voters.

The latest voter preference polls for the presidency show Roxas running third, behind Vice President Jejomar Binay and Poe, or even fourth—behind Rodrigo Duterte, the tough-talking mayor of Davao City.

President Aquino is believed to be committed to endorse the presidential candidacy of Roxas, who gave way to him in 2010, and is trying to bolster his chances by getting Poe to agree to be his vice-presidential running mate.

Mr. Aquino has met twice with Poe but has not asked her to run with Roxas.

After Thursday’s meeting in the Palace, Escudero said he believed Mr. Aquino had not yet chosen a presidential candidate, as indicated by his talking to nonmembers of the LP.

READ: Escudero: Aquino not yet certain whom to support in 2016

Mr. Aquino has said that he will announce his choice after his last address to a joint session of Congress on July 27.

A source said the President was also working to preserve the 2013 coalition that carried the administration in that year’s elections and wanted the alliance to support his chosen presidential candidate.

But that, too, may be difficult, as parties in the coalition are looking to survive the end of the LP’s rule by supporting the potential winner of the presidential election.

The Nationalist People’s Coalition (NPC) was one of the parties that teamed up with the LP to field an administration senatorial slate in 2013, but this time it would decide on its own who to support in the presidential and vice-presidential races, according to Sen. Vicente Sotto III.

The NPC will support the President’s candidates only if they are the same as the party’s choices, Sotto, a senior NPC member, said in a telephone interview.

In an earlier interview, Sotto said there were NPC members who looked favorably on a Poe-Escudero ticket. Among those who spoke about possible support for Poe and Escudero was Isabela Rep. Giorgidi Aggabao, the party president, he said.

But on Saturday, Sotto noted that there were also NPC members supportive of Binay, including former Pangasinan Rep. Mark Cojuangco—the son of NPC’s founder—and the Gatchalians.

Aquino asks Poe, Escudero for a meeting with Roxas

Escudero still undecided on support for Roxas in 2016