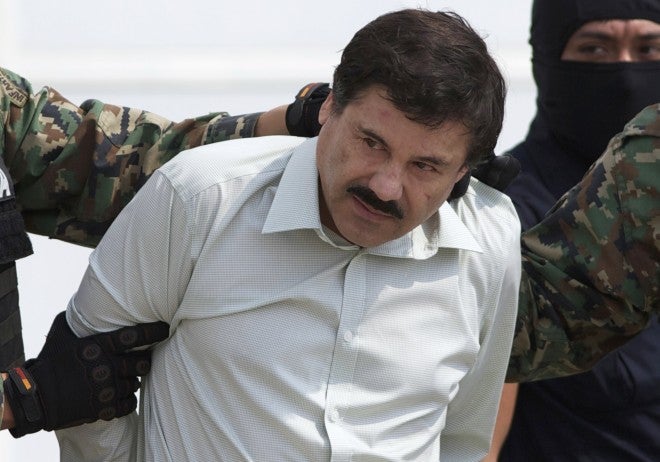 FILE – In this Feb. 22, 2014, file photo, Joaquin “El Chapo” Guzman, head of Mexicos Sinaloa Cartel, is escorted to a helicopter in Mexico City, following his capture overnight in the beach resort town of Mazatlan. Mexicos security commission said in a statement late Saturday, July 11, 2015, the top drug lord Joaquin El Chapo Guzman has escaped from a maximum security prison, the second time he has fled after being captured. (AP Photo/Eduardo Verdugo, File)

The kingpin was last spotted by security cameras in the shower area of the Altiplano prison, 90 kilometers (55 miles) west of the capital, on Saturday night before disappearing, the National Security Commission said.

An alarm was issued after “he was not visible” for a while and “the escape of Guzman was confirmed,” the commission said in a statement.

“An operation to locate him was deployed in the area and on roads of neighboring states,” it said, adding that flights were suspended at the nearby Toluca airport.

The Altiplano prison houses the country’s most notorious drug lords, murderers and kidnappers.

The security commission did not have more details about the escape, and scheduled a press conference for Sunday morning.

Guzman’s first break from prison was in 2001, when he slipped past authorities by hiding in a laundry cart.

Marines finally recaptured Guzman in February 2014 in a pre-dawn raid in a condo in Mazatlan, a Pacific resort in Sinaloa state.

Guzman, 58, whose Sinaloa cartel shipped narcotics across the globe, was considered the world’s most wanted drug lord.

His second escape is sure to embarrass the administration of President Enrique Pena Nieto, who was flying to France for a state visit when Guzman fled.

Pena Nieto’s government had won praise for capturing the powerful kingpin, a diminutive but feared man whose nickname means “Shorty.”

Guzman’s Sinaloa cartel’s empire stretches along Mexico’s Pacific coast and deals drugs to the United States and as far as Europe and Asia.

Before his last capture, the United States had offered a $5 million reward for information leading to his arrest, while the city of Chicago declared him “Public Enemy Number One,” joining American gangster Al Capone as the only criminal to ever get the moniker.

He used to be on Forbes magazine’s list of billionaires until the US publication said in 2013 that it could not verify his wealth and that it believed he was increasingly spending his fortune on protection.

His cartel became entangled in brutal turf wars against the paramilitary-like Zetas cartel and other gangs for years.

The drug war began to escalate after former president Felipe Calderon sent the army and navy to rein in the cartels in 2006, a deployment that analysts say exacerbated the violence.

More than 10,000 were killed in Ciudad Juarez alone in violence attributed to battles between Sinaloa and Juarez cartel members for supremacy in the key drug corridor at the border with the US state of Texas.