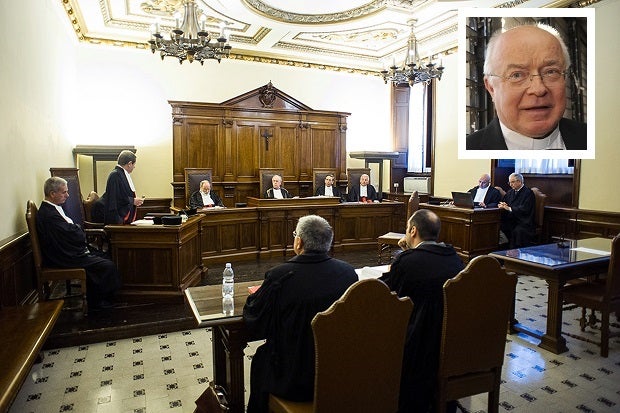 A view of the courtroom during an hearing of the trial against former papal diplomat Jozef Wesolowski (inset), at the Vatican, Saturday, July 11, 2015. A former papal diplomat charged with the sexual abuse of boys was hospitalized and put in intensive care ahead of the opening Saturday of his trial, Vatican officials said. The trial against Wesolowski had been scheduled to open Saturday morning in a Vatican courtroom. The judge was expected to adjourn to a later date. AP

VATICAN CITY — A former papal diplomat accused of sexually abusing teenage boys while stationed in the Dominican Republic has been hospitalized in intensive care, forcing adjournment of his trial Saturday in a Vatican courtroom for allegedly causing grave psychological harm to the victims and possessing an enormous quantity of child pornography.

Medical records showing that Jozef Wesolowski had been admitted Friday because of “sudden illness” to an intensive care unit of a Rome public hospital were presented by the prosecutor to the judge, who read it without revealing what ails the former prelate.

The 66-year-old Pole’s lawyer, Antonello Blasi, told journalists he hadn’t been told what the illness is.

“I saw him two or three days ago, and, given his age and his state of mind, he was fine,” Blasi said. The lawyer told the court that Wesolowski had been “willing and able” to come to court.

Wesolowski, who resides in a room in the courthouse, had been put under house arrest at the Vatican, but subsequently was allowed to go outdoors as long as he stays within the confines of Vatican City.

Judge Giuseppe Della Torre adjourned the trial indefinitely. With summer vacations approaching for the court and Wesolowski’s medical condition, it was unlikely to resume until after summer.

A Vatican spokesman, the Rev. Ciro Benedettini, later told journalists that Wesolowski felt ill on Friday afternoon, was taken to a Vatican infirmary, and then transferred to a hospital. Citing reasons of patient privacy, Ciro declined to say more, including which hospital.

The trial is seen as a high-profile way for Pope Francis to make good on pledges to punish high-ranking churchmen involved in sex abuse of minors, either by molesting children or by systematically covering up for priests who did. Recent changes to the Vatican legal code under Francis’ leadership allowed prosecutors to broader their case against Wesolowski.

Charges included possession of what prosecutors described as “enormous” quantities of child pornography on his two computers, including after Wesolowski was recalled to the Vatican following the emergence of rumors that he sexually abused shoeshine boys near the waterfront in Santo Domingo, the capital of the Dominican Republic.

Wesolowski was the first such high-ranking Vatican prelate to be criminally charged at the Holy See for sexually abusing minors.

In Saturday’s six-minute hearing in a tiny courtroom, the clerk read out the charges, including one of “conduct that offends the principles of Christian religion or morality for having repeatedly accessed pornographic sites,” including while in Vatican City.

Another charge described how Wesolowski — in one case with the alleged complicity of his aide, a former deacon — allegedly “corrupted, through lewd acts, adolescents presumed to be between 13 and 16 years old, in order to carry out on them, and in their presence, sexual acts.” Prosecutors said that at least once the sexual activity happened in a public place.

The trial indictment also accused him of causing psychological damage to his victims.

He has been defrocked, a decision he is appealing. While a Vatican citizen since 1980, he lost the diplomatic immunity he enjoyed while serving as papal nuncio.

Wesolowski was ordained and later appointed as bishop by John Paul II, a fellow Pole whose papacy was marked by reluctance to fire bishops in abuse scandals.

In 2008, during Benedict XVI’s papacy, Wesolowski was appointed Vatican ambassador to the Dominican Republic. The Vatican said Wesolowski lost his diplomatic immunity in 2014, the year following his recall after rumors surfaced about the abuse.

When the trial resumes, those monitoring the Vatican’s handling of sex abuse scandals that started disgracing churchmen in the United States and elsewhere decades ago will watch to see if testimony indicates top-ranking officials might have heard allegations about Wesolowski’s conduct but stayed quiet.

“If he is found guilty, the pressure will be on Pope Francis and the Vatican to cooperate in all the countries where he served,” said Anne Barrett Doyle, co-director of BishopsAccountability.org, a watchdog group that follows the global abuse crisis in the Catholic Church.

Speaking by telephone from the United States, she was referring to the six countries, plus Puerto Rico, where Wesolowski was assigned during his career as a Vatican diplomat.