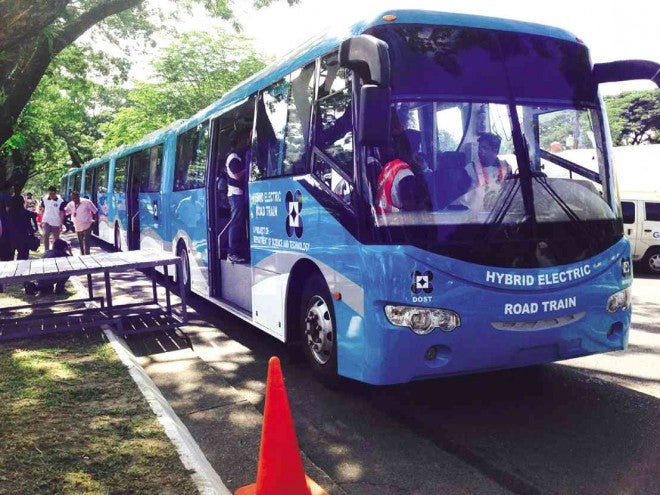 The DOST “road train” during its presentation at the Clark Freeport on June 25. TONETTE OREJAS/INQUIRER CENTRAL LUZON

In a metropolis desperately in need of more trains, this one offers both a cleaner ride and a sense of pride.

The Department of Science and Technology (DOST) is set to bring to Metro Manila the Filipino-made “road train” it recently tested in Clark, Pampanga province, to allow the public to get a feel of the hybrid vehicle that represents yet another approach to easing the capital’s mass transportation problems.

The public is encouraged to check out the P45-million road train as it goes on a demo run from July 24 to 28 on a designated route within the Mall of Asia complex, the venue of this year’s National Science and Technology Week (NSTW).

The 40-meter-long five-coach air-conditioned train can accommodate a maximum of 240 passengers. It has a maximum speed of 50 kilometers per hour and is powered by a hybrid engine that runs on either diesel fuel or electric batteries. The front of each coach generates the power for the entire transport.

It produces less smoke emissions compared to regular vehicles, thus creating a smaller carbon footprint, according to the DOST.

Its engineers work under the DOST’s Metals Industry Research and Development Center.

Secretary Mario Montejo said it was the DOST’s hope to see them fully commercialized and plying the streets.

This year’s NSTW will also feature an exhibit recognizing the contributions and achievements of Filipino women scientists in the local and international scientific community.

Dubbed “She for We,” the exhibit seeks to dispel the notion that local scientific community remains “a male-dominated” circle, as it celebrates the works of Dr. Ma. Corazon A. de Ungria, Dr. Reinabelle Reyes, Dr. Mary Ann Go and Ma. Antonia Arroyo.

Ungria heads the DNA Analysis Laboratory of the National Sciences Research Institute at the University of the Philippines Diliman. Reyes, an astrophysicist, once led a team who proved Einstein’s Theory of Relativity on a cosmic level.

Arroyo is the founder of a pioneering biotechnology consulting and commercialization firm in the country, while Go is a successful neuroscientist.

Experts from the Philippine Institute of Volcanology and Seismology will also be present at the NSTW to answer queries from the public regarding the West Valley Fault.

Science Assistant Secretary Raymund Liboro quoted Science Secretary Mario Montejo when he told reporters in a press briefing on Friday that this year’s NSTW will “bring home the point that we have what it takes to compete not only in Asia but throughout the rest of the world.”

“Under the Aquino administration, the DOST has been able to reap the rewards of its strategic focus of enhancing the science and technology capability, including the country’s intellectual resources,” Liboro said.

Over the last five years, Liboro said, the host of DOST-initiated programs could be summed up in the Filipino phrase “agham na ramdam” (useful science).

“We were able to let the people feel the importance of science through our programs,” Liboro said, citing as an example Project Noah for weather, Starbooks for education and Small Enterprise Technology Upgrading Program for micro, small and medium enterprises.

Read Next
4 people gored in Spain’s 5th Pamplona running of the bulls
EDITORS' PICK
DOH checking if 3 COVID cases due to Omicron
PH falls short of target of 3-day nat’l vax drive by 1M jabs
Holidays made best with Acer’s ‘Holidays at Home’ raffle promo
Smart offers wireless fiber-like speeds to Filipino homes with country’s first 5G Prepaid Home WiFi
Two more sites at Robinsons Malls for temporary offsite passport services
Gov’t fine-tunes alert level system
MOST READ
Isko’s messaging takes a turn as he commends Duterte
Roque ‘hurt’ after presidential aspirant did not adopt him in Senate lineup
Pharmally’s Twinkle Dargani in tears when asked about missing documents
Gordon to Duterte: ‘How dare you ask for Filipinos’ vote when you failed them?’
Don't miss out on the latest news and information.