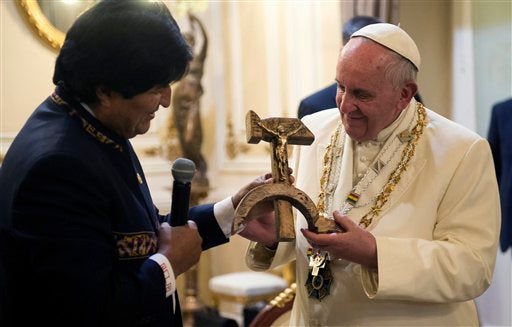 Bolivian President Evo Morales presents Pope Francis with a crucifix carved into a wooden hammer and sickle, in La Paz, Bolivia, Wednesday, July 8, 2015. The crucifix is a replica, originally designed by Jesuit activist Luis Espinal, who was assassinated in 1980 by suspected paramilitaries during the months that preceded a military coup. Even though the Vatican was not expecting the unusual gift, it is seeking to explain the “Communist crucifix” given to Francis, saying it’s a symbol of dialogue and not an offensive melding of faith and ideology. AP

SANTA CRUZ, Bolivia — Bolivia and the Vatican both sought Thursday to tamp down controversy over President Evo Morales’ gift of a “Communist crucifix” to Pope Francis, insisting that no offense was intended or taken by the gesture.

Morales gave Francis the crucifix carved into a hammer and sickle upon Francis’ arrival in Bolivia Wednesday, immediately raising eyebrows given Morales’ past attacks on the church and his socialist bent. Critics said it was a distasteful, and possibly heretical melding of faith and ideology.

It turns out, the crucifix was originally designed by a Jesuit activist, the Rev. Luis Espinal, who was assassinated in 1980 by suspected Bolivian paramilitaries during the months that preceded a military coup. Francis, a fellow Jesuit, stopped his motorcade to pray at the site where Espinal’s body had been dumped when he arrived Wednesday.

The Vatican spokesman, the Rev. Federico Lombardi, said Thursday the pope had no idea that Espinal had designed the crucifix and was surprised to receive it — a reaction clearly visible in the footage of the encounter. Some reports suggested the pope told Morales “This isn’t good;” one of Francis’ friends sent a tweet quoting him as saying such. But Lombardi said it wasn’t known what the pope had said.

Lombardi said Espinal had designed the crucifix as a symbol of dialogue and commitment to freedom and progress for Bolivia, not with any specific ideology in mind. Lombardi said he personally wasn’t offended by it.

“You can dispute the significance and use of the symbol now, but the origin is from Espinal and the sense of it was about an open dialogue, not about a specific ideology,” Lombardi said.

He noted the context in which Espinal was living: as a priest working for social justice in Bolivia during a period of instability that preceded a right-wing dictatorship known for human rights abuses.

However, one of Espinal’s friends and fellow Jesuits, the Rev. Xavier Albo, said Espinal’s intent was for the church to be in dialogue with Marxism, and said Espinal had altered his crucifix to incorporate the Communists’ most potent symbol: the hammer and sickle.

“In this he clearly wanted to speak about the need to permanently dialogue not just with Marxism but with peasants and miners etc.,” Albo told The Associated Press earlier this month.

The Vatican launched a harsh crackdown on Liberation Theology in the 1970s and 1980s, fearing that Marxists were using its “preferential option for the poor” to turn the Gospel into a call for armed revolution.

The Bolivian government insisted the gift wasn’t a political maneuver of any sort, but was a symbol that Morales thought the “pope of the poor” would appreciate.

“That was the intention of this gift, and it was not any sort of maneuver … It was really from great affection, a work designed by the very hands of Luis Espinal,” Communications Minister Marianela Paco told the Patria Nueva radio station.

The Catholic blogosphere was buzzing Thursday with the “Communist crucifix” and what, exactly, Morales intended by giving it to the pope.

The Rev. James Bretzke, a theologian at Boston College in Massachusetts, said there is no church legislation that addresses whether Christian imagery is sacrilegious since Christian art is often portrayed in a variety of ways.

But, he continued: “Is this in good taste? Does this seem to be using the Crucifix for political agenda? And I would say the answer is probably yes. Therefore, I would judge it personally in bad taste and especially manipulative to present it to the Holy Father in a situation like that where it clearly hadn’t been cleared ahead of time.”

The Rev. Robert Gahl, a moral theologian at Rome’s Pontifical Holy Cross University in Rome, said it all boils down to Espinal’s intent in designing the cross and Morales’ intent in giving it to the pope.

“I’d suppose that, given Morales’ warm welcome and Espinal’s personal convictions, the intent was not to offend but rather to indicate potential for dialogue and even synergy,” he said in an email. “Christians tend to see our symbols from the perspective of universal love, redemption, and even Christ’s triumph over evil. Indeed, that is what the cross is all about!”