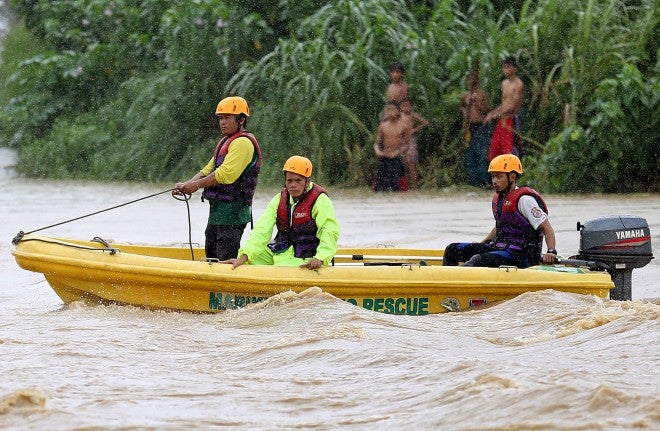 Rescue workers search the Marikina River for the body of Jozar Fazon who was reportedly swept by strong currents due to days of heavy rain while he was picking vegetables along the banks of the river. INQUIRER PHOTO/RAFFY LERMA

A man and a baby girl died after they were hit by a collapsing fence in Meycauayan City in Bulacan on Wednesday, while two others drowned in separate instances in Binalonan, Pangasinan, and Meycauayan. The fifth victim was electrocuted in San Fabian, Pangasinan.

Rain dumped by Falcon and enhanced by the southwest monsoon did not raise much the water levels in dams in the region.

In Bulacan, Demetrio Ylasco, 76, died after the concrete fence of his neighbor collapsed and pinned him in Barangay Iba in Meycauyan City on Wednesday. One-year-old Irene Lumugho died when another concrete fence in Barangay Pantoc, also in Meycauayan, fell on her family’s shanty.

Also in Meycauayan, Aljon Lapitag Jr., 5, drowned in a creek in Barangay Camalig.

A foot bridge in Barangay Gaya-Gaya in Meycauayan also collapsed while a landslide hit Barangay Pinulot in Dinalupihan, Bataan. No one was hurt in the two incidents.

At least 285 residents evacuated from Meycauayan City, 20 residents from the City of San Jose del Monte in Bulacan, 230 residents from Dinalupihan and 22 residents from Mariveles in Bataan were moved to barangay halls, public schools, daycare centers and churches as floodwaters swamped their villages.

Four fishermen had been missing off Bolinao, Pangasinan, since July 2, the National Disaster Risk Reduction and Management Council said.

The Office of Civil Defense (OCD) regional branch in San Fernando City in La Union also reported about P22.1 million losses in crops and fishery and P143 million damage to roads and bridges.

On Thursday, the Pangasinan provincial police office said Danilo de Vera, 53, a farmer from Barangay Sta. Catalina in Binalonan town, was found dead and believed to have drowned on Wednesday at the Tagamusing River in the town.

The Pangasinan provincial disaster risk reduction and management office (PDRRMO) earlier reported that Aljohn Reyes, 9, of Barangay Nibaliw West in San Fabian town, was electrocuted when he touched a bulb receptacle while playing in the rain on Tuesday.

The La Union PDRRMO said four persons from San Fernando City and the towns of Bacnotan and Balaoan were treated in different hospitals for injuries they suffered at the height of the flooding in the province due to rain dumped by Egay.

The La Union provincial board placed the province under a state of calamity in a special session on Monday so calamity funds could be released immediately to 14 towns and the capital San Fernando City which were hit by the storm.

Soliman said the government would provide funds for the cash-for-work program so residents willing to work and clean the debris from the storm could be given money.

Nine Pangasinan fishermen were also hurt after drifting in the West Philippine Sea for three days when their fishing boat capsized on July 5 due to rough seas. Four of their companions were missing.

The OCD also said five Chinese fishermen were hurt when their vessel ran aground on Monday off Currimao town in Ilocos Norte.

Classes from preschool to high school levels were suspended on Wednesday in Pangasinan due to the expected moderate to heavy monsoon rains in the province.

He said water levels in the Sinocalan-Pantal and Bued-Cayanga rivers and their tributaries, which cut through central Pangasinan towns, were rising due to continuous rains.

Diaz said the water level in Agno River, which traverses 16 Pangasinan towns and cities from San Manuel town to Lingayen, was slowly rising.

Flooding had been reported in Barangay Songkil, a village along the Sinocalan River in Sta. Barbara town.

Virgilio Garcia, hydrologist of the National Power Corp., said the water level at the San Roque Dam was 236.22 masl at 6 a.m. Thursday. This was 43.78 meters below its spilling level of 280 masl.

On July 7, the Binga Dam, which is located in the upstream of Agno River in Benguet, spilled water for four hours when it reached its critical level.

The Egay-enhanced monsoon also had two fatalities in the National Capital Region and Visayas: A Korean national who went diving in Cebu and was found dead last July 8; and John Kevin Jacinto, 19, who fell from a riprap in Aurora Boulevard in Quezon City.

As of 4 p.m., around 20,243 families or 101,032 persons were affected by the rains, with 1,810 transferred to evacuation centers in National Capital Region, Central Luzon, and Autonomous Region in Muslim Mindanao, said NDRRMC spokesperson Mina Marasigan.

Falcon is expected to exit the Philippine area of responsibility by Friday morning but the rains are likely to continue until the weekend, according to Pagasa. Reports by Carmela Reyes-Estrope, Tonette Orejas and Allan Macatuno, Inquirer Central Luzon; Gabriel Cardinoza, Cristina Arzadon and Leilanie Adriano, Inquirer Northern Luzon; and Frances Mangosing, Inquirer.net