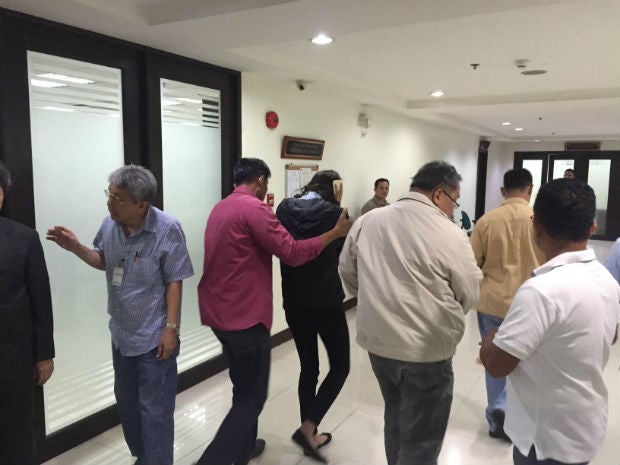 Jeane Catherine Napoles (in black jacket), the daughter of Janet Lim-Napoles, hides herself from the media during her arraignment on a tax evasion case. MARC JAYSON CAYABYAB/INQUIRER.net

Jeane Catherine Napoles, the daughter of accused pork barrel scam mastermind Janet Lim-Napoles, refused to enter a plea on Wednesday for her tax evasion case before the Court of Tax Appeals.

Dressed in a black jacket, the younger Napoles completely hid her face behind a folder from the cameras upon arriving at the court.

Inside the courtroom, Jeane, 25, said she refused to enter a plea upon the advice of her counsel. The court thus entered a not guilty plea.

“Your Honors, upon the advice of my counsels, I refuse to enter a plea,” the tall, posh, curly-haired Napoles said with a twang.

Jeane, who graduated from the prestigious Fashion Institute of Design and Merchandise in Los Angeles, became a social media sensation due to the Instagram photos of her lavish lifestyle while her mother faced allegations of stealing from state coffers.

She was escorted outside the court room flanked by two burly bodyguards.

The court scheduled the preliminary conference on July 14 and pretrial on July 29.

She was arraigned for violation of Article 254 of the National Internal Revenue Code (NIRC), which penalizes willful attempt to evade or defeat taxes. Such a violation upon conviction is punishable with two to four years imprisonment and a fine between P30,000 to P100,000.

According to the information filed against her, Napoles allegedly attempted to evade or defeat paying P17.461 million in income taxes for the taxable year of 2011 for a residential condominium she bought in Los Angeles worth P54.725 million.

She was arraigned on May 27 for violation of Section 255 for failure to file, supply correct and accurate information and pay tax. Such a violation is punishable with one to 10 years imprisonment and a P10,000-fine.

According to the Department of Justice, Jeane Catherine, is liable to pay P17.888 million in basic tax deficiencies broken down as follows: P17.461 million for the residential condominium in California for taxable year 2011, and P426,866.67 as co-owner of two Pangasinan farm lots for taxable year 2012.  IDL