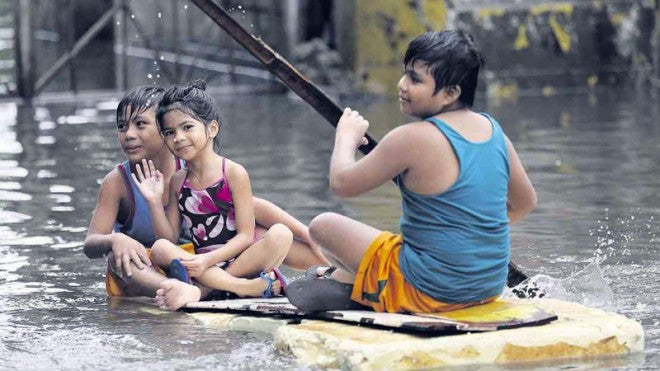 FLOOD PRINCESS A boy ferries children on a makeshift raft to their destination along a flooded portion of Road 10 in Tondo, Manila, after heavy rains brought by Tropical Storm “Egay.” RAFFY LERMA

All ships were ordered to remain in harbor and some flights were canceled in northern Luzon, while schools were closed in Metro Manila on Monday due to flooding and landslides from Tropical Storm “Egay,” disaster officials said.

In Bataan province, Niel Jimenez, 35, a clerk of the Land Transportation Office in Valenzuela City, drowned at a beach resort in Morong town on Sunday, police said. Jimenez, police said, was hit by big waves as he swam 50 meters away from the shore.

Storm warnings were issued in at least 14 areas as Egay (international name: Linfa) moved slowly across northern Luzon before exiting on Sunday. It was carrying maximum wind gusts of 100 kilometers per hour.

“We are grounding all sea travel and fishing operations in the north because we expect sea waves to go as high as 4 meters,” Pama said.

“We don’t want any loss of life or any accidents,” he added.

Army units have been placed on standby to evacuate people to temporary shelters if needed, Pama said.

The government was expecting some crop damage in rice-producing areas in Luzon. Egay made landfall in the north on Saturday and was about 135 km southwest of Laoag City on Monday.

The Department of Social Welfare and Development (DSWD) said more than 1,600 families were affected by the storm. Four families, or 19 people, were evacuated in Benguet and Kalinga provinces in the Cordillera Administrative Region due to landslides.

In the Ilocos region, 1,603 families from the provinces of La Union, Pangasinan and Ilocos Sur were also evacuated from their homes.

In Western Visayas, 34 families, or 157 people, were affected by big waves and a tornado.

“The prepositioning of relief supply at the provincial and municipal levels is a regular disaster preparedness measure that we undertake to ensure that assistance is not delayed,” Soliman said.

Some 100,125 family food packs have been sent to DSWD offices in the Ilocos region, Cagayan Valley, Central Luzon and the Cordillera Administrative Region to be distributed to affected towns.

Soliman said a P12.3-million standby fund would be used by the regional offices to purchase emergency relief supplies.

The DSWD also sent 146,850 food packs to Calabarzon, Mimaropa, the Bicol region and Western Visayas as these areas are also experiencing heavy rains.

Eight flights bound to and from different destinations in the north were canceled due to the inclement weather. The airlines said passengers affected by the cancellations might be accommodated in the next available flights without additional charges.

Hope of finding the seven Negrense fishermen missing at sea dimmed Monday, five days after their vessel sank between Gigantes Islands off the coast of northeastern Iloilo, and Madridejos town in Bantayan, Cebu.

Lt. Cmdr. Ramil Palabrica, Coast Guard Bacolod Station chief, said John Rey Vergara, Antic Celeste, Gerry Bangalisan, Norberto Patriarca and three others identified only as Jomar, Jimbol and Anel, who were on board F/B Inday Sweet when it sank about 4:30 p.m. on Thursday, had not been found as of Monday.–Reports from wires, Julie Aurelio, Gil C. Cabacungan and Jeannette I. Andrade in Manila; and Carla Gomez, Inquirer Visayas