‘We hit the trees before the crash’
By: Thelma Sioson San Juan - Lifestyle Editor / @ThelmaSSanJuan
Philippine Daily Inquirer / 01:14 AM July 07, 2015 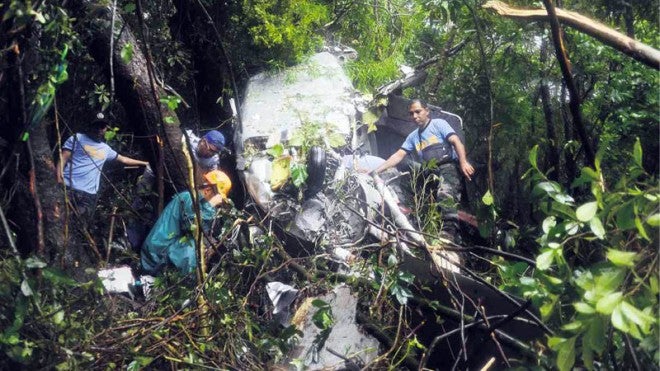 CHOPPER WRECKAGE Probers examine the wreckage of the Augusta helicopter that crashed on Mount Maculot in Cuenca, Batangas province, on Sunday, killing billionaire Archie King and the pilot. A survivor said King switched off the engine moments before the helicopter crashed, preventing the aircraft from exploding. ARNOLD ALMACEN

It was a routine chill-out weekend on a yacht that ended in a tragedy that stunned the country’s business and lifestyle communities.

But nonetheless Anton San Diego, magazine editor and Inquirer Lifestyle columnist, is grateful and happy for his second lease on life.

San Diego was one of the six passengers who survived the helicopter crash Sunday noon on Mount Maculot, Cuenca, Batangas province.

Killed in the crash were hotel magnate and philanthropist Archimedes “Archie” King and his pilot, Felicisimo Esteban Taborlupa Jr.

The group had spent Saturday on King’s yacht that was docked off Puerto Galera in Oriental Mindoro province. From there on Sunday morning, the group took the helicopter back to Manila.

“It was only when I heard a sound, a thump, then I heard Lingling (Angeles, King’s wife) ask, ‘Where’s Archie,’ that I realized we had crashed on the mountain,” San Diego recalled during our talk on the phone on Monday.

“We hit the trees before the crash. It must have been the trees that softened our impact against the mountain,” San Diego added.

He remembered how King had the presence of mind to turn off the engine at the point of impact and thus prevented the helicopter from bursting into flames.

San Diego, editor in chief of Philippine Tatler, was visited by friends and relatives on Monday at St. Luke’s Medical Center in Bonifacio Global City, where he and the rest of the passengers were brought after the crash.

Aside from an aching back, he didn’t seem to have suffered any injury, although he remains under observation by doctors and awaits the results of medical tests.

The other passengers are equally prominent in the business and lifestyle scene—celebrity bag designer Tina Maristela-Ocampo, her husband, fashion retailer Ricco Ocampo, and Christopher and Patricia Chilip.

All sustained minor injuries and were brought to the hospital.

It must have been only about 10 minutes after the takeoff when the crash happened, according to San Diego.

“Lingling’s really a strong woman and her first instinct was to look for Archie,” San Diego recalled the few seconds after the crash.

King sat in front, with the pilot.

As Lingling tried to grope for her husband, the others ambled out of the wreckage.

In a few minutes, San Diego said, people from the nearby barangay (village) rushed to the scene and helped pull King out of the wreckage. Apparently, King had been pinned down in the crash.

“But he was still replying a little as we asked him if he was OK,” San Diego said.

He then helped Tina Ocampo walk downhill to the roadside, as the rest stayed behind with King.

From the barangay around Mt. Maculot, the whole entourage was driven to the nearest hospital, which, in San Diego’s estimate, must have taken an hour.

It was in the hospital where King died shortly after the crash. It was, in a most painful irony, the birthday of Atticus, one of his two sons with his first wife, Marvie del Rosario. (His other son, Ian, is married to TV celebrity Joey Mead.)

King, 62, was the scion of the family that built the most popular motel chain in the country, the Victoria Court. However, King, with his progressive management style, traded up the chain to boutique hotels, and more important, focused on humanitarian projects, from Gawad Kalinga to the granting of student scholarships.

He was also a fitness buff whose active lifestyle made him the envy of many men his age.

King and his wife, Lingling, had invited San Diego, the Ocampos and the Chilips to spend Saturday on his yacht.

It was on Sunday morning when the group decided to fly back to Manila before the storm hit land.

Tina Ocampo, whose Celestina bags found a global market and has landed in Vogue many times, suffered fractures, as did her husband, Ricco. The couple opened the boutiques Myx and Black Shop.

Patricia Echauz Chilip, who works for the family-owned Standard Insurance, is up and about, according to friends. Her husband, Christopher, the distributor of Dunlop tires in the country, needed minor surgery.

Aside from having a new lease on life, San Diego is also thankful that the barangay folk around the crash site not only came to the rescue, but also turned over their personal stuff to them intact.

That was a heartwarming gesture of kindness on a stormy weekend.