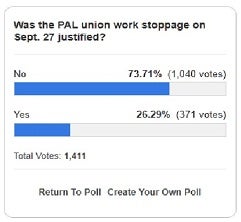 MANILA, Philippines – The Philippine Airlines (PAL) Union work stoppage on September 27 was not justified, according to an online poll by INQUIRER.net

Members of the Philippine Airlines Employees Association (PALEA) reported to work on September 27 but refused to do their jobs, such as refuelling airplanes, moving cargo and manning check-in counters, causing thousands of passengers to be stranded at the Ninoy Aquino International Airport (NAIA) Terminal 2.

PALEA was protesting the Airline’s plan to outsource 2,600 jobs in the reservations, in-flight catering and airport services.