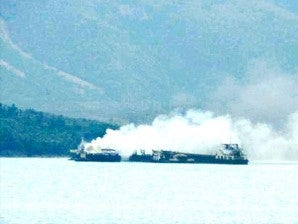 Two barges are ablaze off Claver, Surigao del Norte, following Monday’s attack by New People’s Army guerillas in this photo sent via Twitter by Roy A627 who said he was onboard a ship passing by Claver. He said their ship captain later reported that communist rebels had attacked the mining site and burned facilities. contributed photo

MANILA, Philippines – There were no security lapses and authorities are in control of the situation, police and military said, a day after members of the New People’s Army attacked three mines in Surigao del Norte and killed three security guards in the process.

At the Camp Crame national police headquarters in Quezon City, Chief Superintendent Agrimero Cruz Jr., PNP spokesman, maintained that joint elements of the police and military were on top of the situation and denied reports that three security guards were killed in the attacks, saying “there were no casualties[whether] security guards or civilians.”

“Everytime we get reports, they are automatically furnished copies, not only daily, weekly … as obtained and then we immediately inform them, including the PNP in the area,” Osias said in mixed English and Filipino.

Osias said, however, that they could only do so much since these mining firms were private companies with their own security personnel.

“We are not passing the buck… kasi hindi naman talaga pwedeng turuan kung ano pwedeng kung anong gagawin [fact is, we cannot teach them what to do], it’s a private company,” Osias said.

“It’s a private company, the only thing is pwede kaming magbigay sa kanila ng info [we can give them info], training and whatever assistance but to dictate on what to do, pati yung kung anong gagawin nila sa perimeter nila wala kaming hand na dun [including what they should do in their perimeter, we do not have a hand there],” he added.

“You can say that we are conducting massive pursuit operations because we really have to produce results. We have to instill confidence in our investors that we can handle the situation. We’re coming out with security measures, which we are now discussing in a meeting to prevent the same occurrence,” Osias added.

PNP spokesman Cruz said that Interior and Local Government Secretary Jesse Robredo was on his way to the Taganito Mining Corporation “to assess the situation” and to discuss with authorities their courses of action so as to assure investors of strong security measures in the area. “Shifting of forces would depend on [the DILG Secretary’s] assessment.”

Cruz said that aside from combat operations, they would also be providing additional security to the area.

Cruz said that the absence of military forces, specifically the 68th Infantry Battalion which left for retraining, gave the rebels an opportunity to stage the attacks. “There were no elements from the military at the time. If they were there, chances are, the rebels will not be able to make their move.”

He described the raids as “well-planned,” saying extortion may be a motive as companies claimed to have received letters asking for money and firearms.

He said that this may also be the rebels’ way of saying that they were “a force to be reckoned with.” The spokesman estimated the number of the attackers from 200 to 300 rebels.

Cruz said that they were not buying the NPA’s statement that the attacks were made in its fight against corporations that were destroying the country’s environment.

He said they believed that rebels scattered in several areas in Mindanao may have joined forces to carry out the raids.

He said that the PNP condemned the attacks on civilians and investors, saying that the attacks “will not help our countrymen if these establishments close shop. They will be stripped of their sources of income.”