Fatalities in boat sinking rise to 61

ORMOC CITY, Philippines—The number of fatalities in the sinking of the MB Kim Nirvana rose to 61 on Sunday while the number of survivors remained at 142.

Pilar Mayor Jesus Fernandez Jr. assured the families of town mates who lost their lives in the sinking, his town would provide vehicles to transport the caskets of their dead to their hometowns.

Pilar is located on Camotes Island, the destination of the boat when it sank.

Fernandez said the 45 caskets would be brought to the Pilar wharf on the MB Junmar 2 before proceeding to the municipal gym where the bereaved families would be waiting.

The families of those who died in the sea tragedy underwent a stress debriefing with social workers on Sunday and received relief goods from the municipal government. They were also promised P10,000 in financial assistance.

“I feel heavy and distraught. We were together when we left Pilar (for Ormoc). We had no inkling that this would happen,” a teary Lucille Diano told the Inquirer.

The 53-year-old widow returned to her home in Pilar with the body of her father, Diosdado Donayre, in a white casket.

Diano’s father was among the 61 passengers of the Nirvana who drowned when the boat capsized about a kilometer from port on Thursday.

“Now we will return home, me alive but with my father inside the casket,” she said.

On Sunday, Diano boarded the BRP Batangas, the Navy boat used in the search-and-rescue operation, at 10:45 a.m. to return home.

On board the boat were the 45 caskets as well as 359 other passengers that included survivors and their relatives, and officials and personnel of both the Pilar municipal and Ormoc City governments.

Some of the fatalities had been buried in Ormoc by relatives based in the city.

Before the caskets were loaded onto the ship, they were blessed by Father Rafael Pepito of the Saints Peter and Paul Parish in Ormoc.

People were wearing surgical masks to fend off the strong odor from the caskets that enveloped the area.

When the vessel arrived at Pilar port at 1 p.m., it could not dock due to the shallow water.

The passengers had to transfer to another boat, the MB Junmar 2, which brought them to the port at 2:30 p.m.

Families of the fatalities and survivors waited for their arrival at the nearby gym.

Upper Poblacion Councilor Jason Roa could not explain his feelings seeing the survivors and their relatives embracing each other while crying.

“Looking at them makes me cry too,” he said. 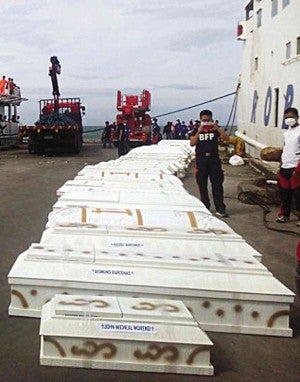 HOMEWARD BOUND White caskets bearing the bodies of passengers who drowned during the sinking of MB Nirvana are loaded onto BRP Batangas in Ormoc City for the trip back to their families and homes on Camotes Island. JOEY A. GABIETA/INQUIRER VISAYAS

Gina Pugosa, 43, a sari-sari store owner from Barangay (village) Moabog in Pilar, said she was still traumatized during the trip back to Pilar.

She stayed at the back of the vessel so she would not see the strong waves.

“But I could not help but get scared whenever the boat swayed,” she said.

Although afraid, Pugosa said she had to board the BRP Batangas because she missed her family after being away for four days.

She had gone to Ormoc to buy supplies for her store.

“I am thankful to God that I was able to return home to Pilar alive,” she said.

Pugosa was picked up by her husband at the port.

Since they live on an island municipality, she said, going to Ormoc City was inevitable in the future.

Pugosa also confirmed earlier reports of overloading of both passengers and cargo. She said several passengers were not on the manifest but may have been allowed on board because crew members were confident the large and new Nirvana could accommodate them all.

She said the boat tilted when the captain maneuvered too fast and the sacks of cement and rice at the back of the boat fell to the deck.

At least 36 dead as ferry capsizes off Ormoc City