From conflict to connection: Nur and Jay show the way 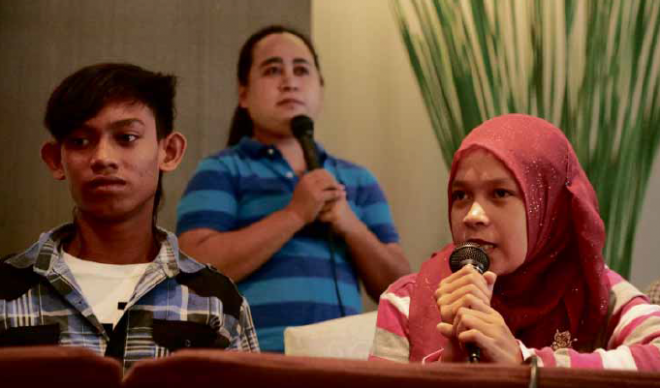 This is the story of Jay and Nur, and how they learned to live harmoniously in an environment of contrasting beliefs and lifestyles during a time of uneasy peace.

Following the September 2013 three-week terror attack in Zamboanga City led by followers of Moro National Liberation Front leader Nur Misuari that left hundreds dead and wounded, about 100,000 residents affected by the siege were relocated in evacuation centers as houses and lives were being slowly rebuilt.

Among them were young people from different groups with longstanding histories of conflict who had no choice but to live together at the Masepla transitory site in Mampang, a small barangay (village) in Zamboanga City.

For Jay Asarani, who belongs to the ethnic Badjao group, and Nur-Aiza Caluang, a Tausug, the experience of living in peaceful coexistence would be a test of their tolerance, faith and resilience.

Badjaos and Tausugs traditionally have not mixed, but now Jay and Nur’s circles of friends are no longer strangers to each other.

Both born and bred in Zamboanga, the teenagers were sent to Masepla with their families, along with at least 500 others displaced by the attack. Circumstances led the local government to find a suitable site for all internally displaced persons to stay, irrespective of ethnic or religious affinity, but mindful of the potential for tension and conflict.

Jay had long enjoyed the seafaring lifestyle of the Badjao. Nur had been raised a devout Muslim. Both confessed to their own biases in the past against people who do not belong to their respective groups.

Nur said that out in the streets, Badjao children had continually ignored her and her friends. “At times they called us names or made fun of our head scarves. They did not want to be friends,” she added. On the other hand, Jay recalls being mocked and cursed for being “smelly and dark-skinned who’s no good for school.”

That was just the petty part.

At the site, little arguments like fighting over a bucket of water or a pack of relief goods could easily escalate to acts of aggression. Biases and unfounded prejudice devoid of logic had created issues especially for young people.

Recently, the United Nations Children’s Fund (Unicef) and its partners rolled out the Creating Connections project in Zamboanga City, as part of an intervention for adolescent health, welfare and education in postdisaster and postconflict areas through life-skills training and filmmaking. In the case of Zamboanga, an additional component—conflict resolution—was added to the modules.

“Creating Connections is a comprehensive life-skills program. We first picked it up in the Philippines as part of the Haiyan (international name of Supertyphoon “Yolanda”) response because of its range of life-skills modules and materials appropriate for emergency situations,” said Emma Brathwaite, Unicef Adolescent Health specialist.

The filmmaking workshop series was aimed at engaging adolescents and young people in exploring the difficulties of living together after the periods of conflict and in close proximity with different ethnic groups. The program has given displaced children and youths in Zamboanga a new language—and new symbols and tools—to help them make better sense of the immense challenges they face.

This was the backdrop for Jay and Nur’s individual transformative journeys.

They attended workshops together and shared lessons on using a computer to make movies, including executing artful cinematography in their filmmaking projects. They attended seminars on adolescent health (including sexual and reproductive health) and together realized that they shared many experiences and many similarities.

In the process, Jay and Nur came to confront—and transcend—the biases they had about each other. They discovered that they shared the same struggles and learned that their participation in Creating Connections could actually lead to a successful working relationship together.

Only recently, Jay and Nur traveled to Manila to join Unicef’s Adolescent Development and Participation (Adap) Global Meeting. Along with other youth groups from Borongan, Eastern Samar province (an area similarly affected by Yolanda where Unicef also implements Creating Connections), the pair represented Masepla in policy dialogues and strategic discussions to advance the Philippines and global adolescent agenda, drawing from their own experiences.

Jay presented the film he made in the participatory video at the Adap meeting and received a standing ovation from the participants for his documentary on hard labor in Zamboanga.

Jay and Nur’s friendship has struck the delicate balance of preserving their ethnic identities. Now they can both laugh easily and crack jokes about their previous assumptions and misconceptions of each other.

Nur said she is thankful to Unicef and Creating Connections facilitators not only for the knowledge and new skills they have acquired, but also for the new friendships she has made with young Badjaos. “Being part of the workshops gave us a better sense of community,” she said.

Jay, for his part, deeply appreciates the experience he and his fellow Badjaos acquired at the workshops. “Before, there were a lot of misconceptions about other ethnic groups in Zamboanga. We thought they didn’t like us. But the group activities brought us all together and made us understand not only each other’s differences, but more important, our similarities.”

Back at the Masepla transitory site, a youthful and harmonizing energy is in the air. An 18-year-old barber gives haircuts to his fellow adolescents for free, no matter the ethnicity. A 20-year-old Tausug evacuee said he now trusts Badjaos more after the workshops. A 19-year-old Badjao father advocates responsible adolescent sexual and reproductive health and encourages his friends to continue their studies in school.

These young adults’ personal stories of transformation and reconciliation show how changing one’s perceptions can pave the way for the next generation to veer away from traditional biases and stereotypes about specific cultural groups. Jay and Nur’s experience of healing is a powerful example about how deeper understanding and tolerance can help in the peace-building process.

Bonding time, too, in Zamboanga shelter