Mourning instead of a wedding 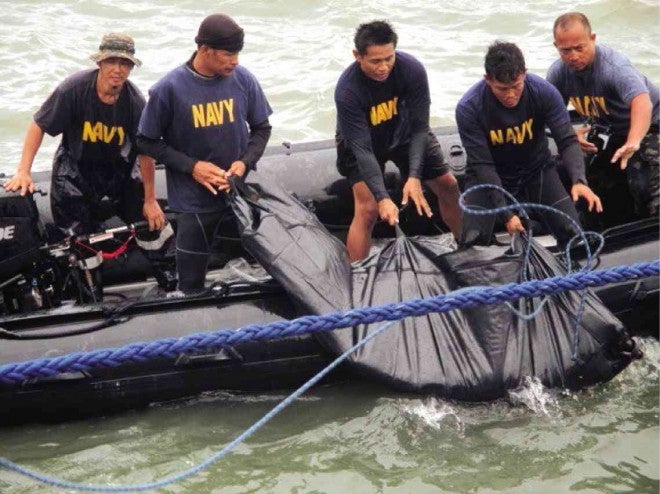 GRIM TASK As the death toll rises, Navy personnel recover another fatality from the capsized MB Nirvana, which sank off the coast of Ormoc City port on Thursday. JHAY GASPAR/INQUIRER VISAYAS

The boy was inconsolable, especially since his sister, Angela, and mother, Abigail Salinas, had yet to be found.

The 13 bodies were recovered near the sunken vessel MB Nirvana, which capsized on Thursday, a kilometer away from the Ormoc City port.

Search and rescue operations continued but authorities would not say how many passengers of the Nirvana remain missing.

There were 142 survivors, which meant there were about 190 passengers on board—more than the 178 passenger capacity of the two-deck wooden motorboat.

The Philippine Coast Guard (PCG) said at least 45 were dead, as of Friday afternoon.

There were also 14 crew members—headed by their captain, Warren Oliverio—who are now under police custody.

Niño Alex Wenceslao and his partner Janet Patuar, along with their 10-month-old daughter Alexa Jean, were on their way to their church wedding.

But the simple wedding set for Saturday would not push through.

The couple and their daughter were among the passengers of Nirvana.

Although Wenceslao, Patuar and their daughter survived, Wenceslao’s aunt Lourdes was among those who died.

Gone were the wedding gown and polo barong that Patuar and Wenceslao were supposed to use for their wedding in Pilar, Camotes Island, Patuar’s hometown.

“We are mourning her death,” the 22-year-old Wenceslao said of his aunt. “I think we will wait a while before we decide when we’ll have our wedding.”

Wenceslao, a messenger at a pharmacy in Ormoc, and Patuar, 23, a cashier in a local store, have been living together for five years.

Last September, they decided to marry but the wedding was postponed because Patuar got pregnant and will give birth to their second child on Aug. 30.

“We scheduled our wedding this Saturday, July 4,” said Wenceslao.

This time, everything was set. The reception was to be held in the house of Patuar’s parents.

Wenceslao’s uncle gave Patuar a wedding gown while a friend lent him a barong Tagalog. Their daughter, Alexa Jean, would be their flower girl.

Holding on to daughter

The couple, their daughter and six of Wenceslao’s relatives boarded the Nirvana on Thursday. Wenceslao recalled that he was holding on to their daughter when the boat suddenly capsized and they were all thrown into the sea.

“I was holding our baby so tight, afraid that I might lose her. Thank God, all throughout that time, we were together,” he said.

But Wenceslao was not a good swimmer.

A cousin, Giovanni Balane, 17, who could swim well, took Alexa Jean from him and put the baby on top of the exposed wooden hull of the boat.

It took about 30 minutes before they were rescued.

Wenceslao and Alexa Jean, who swallowed a lot of seawater, were brought to Ormoc Doctors Hospital. Patuar was confined in Ormoc Sugar Planters Association Hospital for the treatment of her wounds.

Wenceslao said he hoped the Nirvana passengers would be given justice. “We hope that the owner of the boat will be charged (in court). We are calling for justice,” he said.

Transportation Secretary Joseph Emilio Abaya said the boat was not overloaded when it was allowed to sail from Ormoc port on Thursday.

“There was no overloading but we will still see what caused the sinking,” said Abaya, who was in the city to check on the search and rescue operations.

Asked what caused the vessel to capsize, Abaya said he would rather wait for the result of the investigation being conducted by the Coast Guard.

He said he would not want to set a deadline on the investigation because what was more important was to find out the truth.

Survivor Brian Cataylo said he believed the vessel was not only overloaded with passengers but also with cargoes.

He said there could be at least 200 passengers on board with 50 sacks of rice and 100 bags of cement.

Based on survivors’ accounts, he said some passengers were allowed to board the Nirvana even if their names were not on the manifest.

He said some survivors told him that at least four passengers sneaked in or were allowed to board the vessel before it left the port.

“There was overloading of both the passengers and cargoes,” Tribunalo said.

Eastern Visayas District Commander Capt. Pedro Tinampay said they were looking at human error as the cause.

He said Oliverio maneuvered to turn the vessel around in full speed, causing the boat to capsize.

Oliverio and the 14 crew members mostly from Camotes Island are still in police custody.

The crew, along with owner Joge Bong Zarco, face possible charges of reckless imprudence resulting in homicide, physical injuries and damage to property.

A joint team from the Coast Guard and the Armed Forces of the Philippines, using a crane, was able to pull the motorboat to port about 4:15 p.m.

Found on the boat were the belongings of the passengers that included groceries and schoolbags.

Although search and rescue operations had stopped, some families said their loved ones had not been found.

Among them were the young, Gilbert’s mother and sister whose names were not on the list of fatalities.

Gilbert, brother Jobert and sister Angela had been with their mother, Abigail Salinas, to visit his grandmother on Camotes Island.

Gilbert recalled that he had gone to the second deck, leaving his mother and younger siblings on the first deck.

When the boat capsized, he was able to swim to look for his mother, whom he last saw hugging his two siblings.

He was able to hang on to an empty container until he was rescued.

Gilbert was bubbly as he told the Inquirer how he survived. But when he saw the body of his brother, he was reduced to tears.

Divers continued to scour the waters for the missing passengers, most of whom may be trapped inside the boat, he said.

The Coast Guard has deployed BRP Batangas, three rubber boats and an aluminum boat to help in the search, earlier hampered by low visibility, clouds, strong winds and a choppy sea.

According to witnesses, the boat flipped over after it was lashed by strong waves shortly after leaving the port for Camotes Islands, east of Cebu.

“We are hearing about faulty maneuver so human error is being considered,” PCG spokesperson Commander Armand Balilo said, adding that while overloading as a cause has been discounted, it will still be considered “for purposes of investigation.”

“We will also check on reports that life vests were not enough for the passengers,” he said.