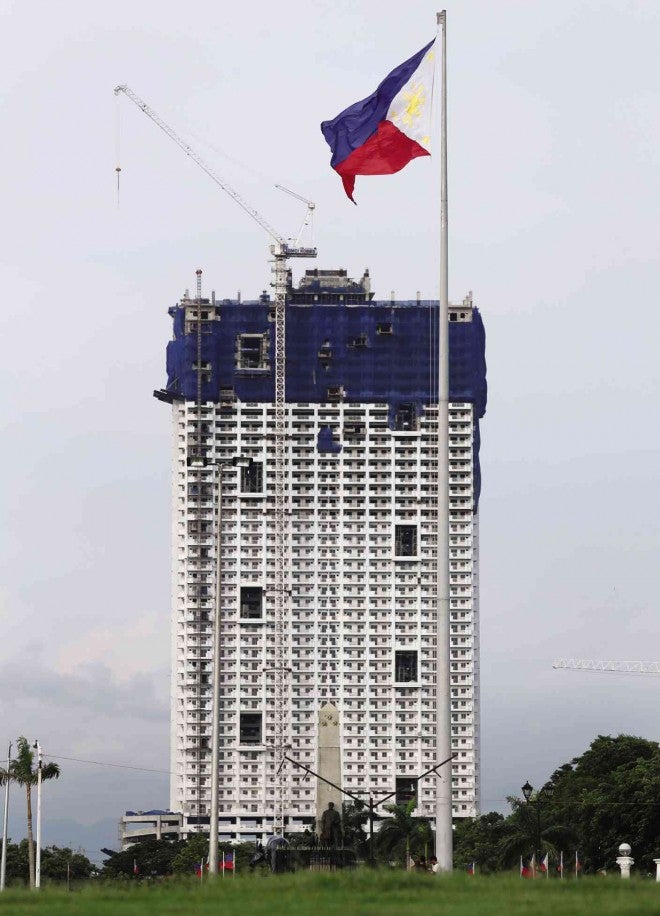 WHERE’S JOSE? From this view, it takes a while to even spot the monument of national hero Dr. Jose Rizal in front of the towering (but now suspended) DMCI condo project. But as the company puts it: “‘View’ is subjective.” EDWIN BACASMAS

The country’s biggest business organization has thrown its support behind the controversial Torre de Manila condo project in Manila, warning that restraining legitimate property developments would again put to question the stability of the local investment climate.

In a statement on Friday, the Philippine Chamber of Commerce and Industry (PCCI) stressed that the “harm” created by the recently issued temporary restraining order (TRO) on the construction of the Torre project goes beyond its developer, DMCI Homes.

“Stability and predictability of rules are important criteria for any business to decide where to locate and go ahead with their investments. Existing and future investors will consider this country a great investment risk because of instability of the rule of law,” the PCCI said.

The Supreme Court last month issued an order temporarily halting the construction of the 49-story Torre de Manila, which critics assail for ruining the sight line of the Rizal Monument. The order stemmed from the September 2014 petition filed by the Knights of Rizal, who wants the structure demolished.

The PCCI stressed that the construction of buildings and other projects that had complied with all the requirements of the National Building Code and obtained building permits from local officials should be allowed by the government to be completed.

Stopping or restraining the construction of legitimate projects midway, as in the case of Torre de Manila, may be seen as a “serious disincentive to investments,” the group warned.

“DMCI locked in investments for the long term in its Torre de Manila project, confident that its compliance with the law was a rock-solid assurance that it would complete its project,” the PCCI further said.

By the time the high court issued the TRO on June 16, DMCI had reportedly sold 90 percent of the Torre units. The Housing and Land Use Regulatory Board later suspended the company’s permit to sell units of the condo.

The Supreme Court is set to hear the oral arguments of the petitioners and DMCI on July 21.

DMCI Homes defended the legality of the project through a newspaper ad earlier this week.

It stressed that the project “followed all the rules and complied with all relevant laws” and thus obtained a building permit for a 49-story residential condominium in July 2012 (during the term of then Manila Mayor Alfredo Lim).

It also pointed out that the Rizal Monument was declared a national monument on April 13, 2013, and that Torre’s location (Barangay 660-A, Zone A, Ermita; behind the old Jai Alai property) is not designated as a heritage zone, cultural property or historical landmark.

The company also maintained that the National Historical Commission of the Philippines issued a clearance for the project on Nov. 6, 2012, saying it was outside the boundaries of Rizal Park, “well to the rear of the Rizal Monument and hence cannot possibly obstruct the front view.”

As to criticism that the project “photobombs” or ruins the background of the iconic Rizal Monument, it said: “View is subjective. It is a matter of perspective. Since the housing project is around 800 meters behind the Rizal Monument, finding good and unobstructed angles when taking photos of, or with, the monument could be easily done.”

“There is also no legal definition or regulation for ‘visual corridors’ in the Philippines,” DMCI added.

It also cited national monuments in other countries that are “visibly surrounded by tall buildings” but have remained historical, cultural and tourism treasures “despite such obstructions.”