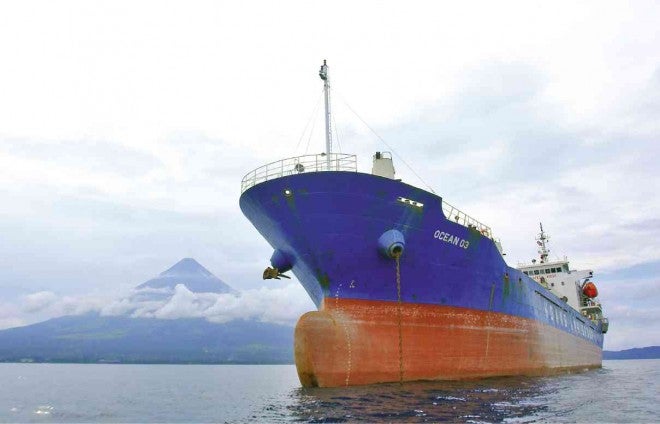 THE MV OCEAN 3, which damaged parts of the Denson Reef off the port of Legazpi City. The reef is a known dive site and fishing area for hook-and-line fishermen. MARK ALVIC ESPLANA/INQUIRER SOUTHERN LUZON

LEGAZPI CITY—A coral reef area off the coast of this city that suffered damage after a Vietnamese cargo ship plowed through it has been closed to fishing to allow experts to further study it and plan steps to be taken for the reef’s rehabilitation.

The 3-hectare Denson Reef, known locally as Pulang Buya in the Albay Gulf, had been declared off limits to fishermen, marking the start of the period of rehabilitation of parts of the reef that had been destroyed by the Vietnamese ship.

Jesus Kallos, city agriculturist, on Thursday said the ban on fishing in the reef area is temporary and meant to just give authorities time to conduct a more thorough study and plan steps that would be taken to rehabilitate the damage portion of the reef.

A 1,200-square meter portion of the reef was destroyed when MV Ocean 3, a Vietnamese cargo vessel, ran aground on June 15 in Denson Reef, some 4 kilometers from the city port.

Kallos said the P4 million paid by the ship owner, ANH TV Shipping, a Vietnamese company, would be used to finance the rehabilitation work.

The rehabilitation plan, said Kallos, includes the provision of an alternative source of livelihood for hundreds of hook-and-line fishermen who regularly fish in the reef area.

At least 937 fishermen would be affected by the fishing ban.

Mayor Noel Rosal had asked the city agriculture office to draw up a three-year program that would rehabilitate Denson Reef and provide an alternative source of livelihood to fishermen.

Rosal also ordered the installation of a permanent marker surrounding the reef to prevent ships from navigating through it.

Read Next
Maguindanao flood forces 50,000 to wait for aid
EDITORS' PICK
Kai Sotto continues to inspire Filipinos by sharing his passions and stories with Smart Prepaid
1Sambayan to nominees: Stick to word of honor
EDITORIAL: Good news, bad news
Alex Eala wins Grand Slam on Independence Day: ‘I hope I made my contribution to the country’
Trust Robredo’s political instincts – Kaya Natin! convener
Ahead of ONE: Full Blast II, Mongkolpetch warns Elias Mahmoudi: ‘Watch out for my fists’
MOST READ
China cautions G7: ‘small’ groups don’t rule the world
1Sambayan to nominees: Stick to word of honor
Duterte, Mayor Sara unlikely to run under same slate in 2022, says Lacson
Leni vs. Sara
Don't miss out on the latest news and information.