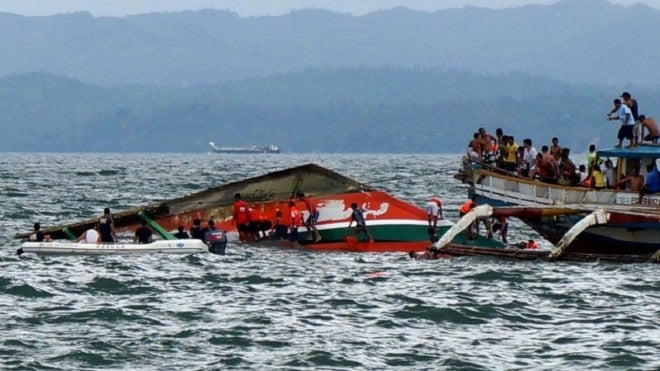 Rescuers search for survivors at the site of the capsized passenger ferry off Ormoc City, central Philippines on July 2, 2015. A ferry loaded with nearly 200 people capsized off a central Philippine port on July 2, officials said, killing at least 38 people in the latest of the country’s long string of maritime tragedies. AFP/Ignatius Martin

MANILA, Philippines—At least three more bodies have been recovered from a ferry that capsized in choppy waters off Ormoc City, raising the death toll in the accident to 39 with 14 others missing, the coast guard said Friday.

Balilo said two passengers initially listed in the manifest did not board the ferry, lowering the total number of people on board to 187 from 189 earlier reported by the coast guard.

Regional coast guard commander Capt. Pedro Tinampay told DZBB radio in Manila that rescuers were using a barge with a crane to move the overturned boat to its side to make it easier for divers to find more bodies. Another crane will be used to raise it upright, he said.

Balilo said the wooden outrigger ferry was maneuvering out of the Ormoc port heading on its routine voyage to Camotes Islands, about 44 kilometers (27 miles) to the south, when it was lashed by strong waves.

He said the captain and some of the crew were rescued and are in custody pending an investigation.

Coast guard officials and survivors said it wasn’t immediately clear what caused the 36-ton ferry, which was carrying a heavy cargo of construction materials and bags of rice, to overturn.

Tinampay said the movement of the cargo inside the ferry “may have been contributory to the shift in the weight of the cargo, that’s why the boat listed.”

Survivors told The Associated Press by cellphone that the bow suddenly rose from the water before the vessel flipped over on one side, turning it upside down and trapping passengers underneath.

Among the passengers who survived were at least three Americans and a Canadian.

Lawrence Drake, 48, a retired firefighter from Rochester, New York, said he was able to revive a woman who wasn’t breathing while they were in the water via mouth-to-mouth resuscitation.

Drake said he also saved the woman’s pregnant daughter and an 8-year-old boy. He said he saw at least seven bodies floating in the water, including two children.

Many of the passengers were screaming in panic, he said.

Drake’s Filipino wife, Mary Jane, said the ferry was pulling slowly out of the port when it suddenly flipped to the left in strong waves.

“No one was able to jump out because it overturned very swiftly. There was no time to jump,” she said.

TV footage showed coast guard rescuers and army soldiers carrying survivors from rubber boats to a beach. Not far away, the bottom part of the vessel could be seen protruding from the water.

A rescue leader, Ciriaco Tolibao, said divers had difficulty looking for bodies because the water was murky.

Cloudy weather at the time of the accident did not pose any danger that would have prompted the coast guard to stop sea voyages, officials said.

A brewing storm in the Pacific was 550 kilometers (340 miles) east of Ormoc and was too far away to affect any part of the Philippine archipelago, according to forecasters. They said winds in the Ormoc region were not strong enough to whip up dangerous waves.

Ormoc, a regional economic and transportation hub of about 200,000 people, is located in a disaster-prone eastern region that is regularly hit by some of the approximately 20 tropical storms and typhoons that blow in from the Pacific each year.

The city was among those devastated by Typhoon Haiyan, one of the most ferocious storms on record to hit land, which left more than 7,300 dead and missing and leveled entire villages in November 2013.

In 1991, a storm set off flash floods in the Ormoc region that killed more than 5,000 people and swept homes and vehicles into the sea.

Frequent storms, badly maintained vessels and weak enforcement of safety regulations have been blamed for many past sea accidents in the Philippine archipelago, where small, rickety inter-island ferries are a main mode of transport.

In 1987, the ferry Dona Paz sank after colliding with a fuel tanker, killing more than 4,300 people in the world’s worst peacetime maritime disaster.